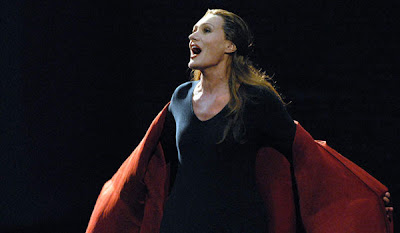 Miracles of every size happened at La Scala yesterday evening: Beginning with my barely adequate seat in the second row in a box being transformed into a first-rate seat, when the people seated at the first row left after the first act. As it seemed, quite a few people don´t seem to go to La Scala to actually see the opera, in which case it is perfectly understandable that 5 hours and 30 minutes of Wagner may seem a bit excessive for showing off your clothes in the two 40-minute breaks. Just before the third act, I counted 11 completely empty boxes in the opposite half of the auditorium – slightly annoying, considering this entire Tristan and Isolde run was sold out in less than 2 minutes.

In brief: It a was a truly magical evening of the kind I´ll probably only experience a handful of times during my entire lifetime, if I´m lucky. The combination of Chéreau, Barenboim and Waltraud Meier was profoundly moving and even exceeding my wildest expectations.

First, Waltraud Meier: She simply doesn´t have any rival in the world as Isolde. I could try objectively to describe some of what has by other been described as her vocal shortcomings, however once she appears on stage and starts to sing, all these things cease to matter: Her committed acting and profound understanding of the part is immensely moving, overriding whatever vocal issues one may have with her - she simply commands the stage from beginning to the end completely without competition today – just listen to Isolde´s Narration and Curse from the 1st act. Or the intensity of her Liebestod, which paralyzed the entire house. I´ve never experienced anything like it. I actually managed to walk into a mirror on my way down from my box seat (well, it DID look like the staircase).

And Patrice Chéreau´s production was completely breathtaking: The sinister walls, the ship and the simple clothing provided the perfect neutral backdrop for this tragedy. For Chéreau´s true strength lies in making the characters come alive, in creating those grand emotional tableaus. The scenes between Siegmund and Sieglinde in his 1976 Walküre comes to mind, since basically it is the same thing he does here: Create tremendous emotions by the detailed stage direction in which scenes of epic beauty filled with real human emotions are the cornerstones. And his take on the story is the only way it makes sense: There is, of course, no love potion. By believing to be dying from the death potion, Tristan and Isolde admit to their feelings to each other, present (just as in the text) from the start.

Chéreau´s images just lingers on for days: The way Tristan touches Isolde's hair when she asks for revenge - the way Tristan grasps Isolde´s dress after drinking the potion - how the sailors remain frozen when Tristan and Isolde embrace - how Tristan and Marke embrace after the discovery of the couple - Marke desperately holding Isolde back when Tristan is fatally wounded - the blood trickling down Isolde´s chin during the Liebestod – I could go on. Moving beyond words. And by not making this a chamber drama, but placing additional non-speaking characters around the protagonists, Chéreau adds an extra dimension to the drama.

Last in this magical trio, Daniel Barenboim – both epic and dynamic conducting, never loosing the structure of the piece. The Scala orchestra doesn´t (yet) react with the same precision as they do in Berlin, but the sound was glorious. Interestingly, Barenboim´s approach here seemed more Italianate (emphasizing the grandness of the score rather than the usual string dynamics) than I´ve heard him do previously. Curiously Barenboim chose to place all brass and woodwind in the right side of the pit. I was sitting right above the brass section, but the acoustics seemed to balance out nicely. Of course, you´d be tempted to say, he conducted without a score. And is so familiar with Waltraud Meier´s Isolde (they probably have performed it more than 50 times together) that he´d sit down and drink a glass of water while she was singing and saved the standing up and clearly marking the beat for Ian Storey´s passages (where it was clearly needed).
For quite some stretches Barenboim doesn´t even mark the beat and just lets the orchestra play, pointing at various groups of players at a time. Amazingly, the first thing he did after both the 2nd and 3rd act was to immediately go down to one of the string players to have a lengthy discussion with him about some aspects of the score. 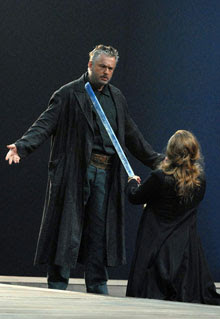 Since every new Tristan seems to be judged by Lauritz Melchior standards, British tenor Ian Storey obviously fell somewhat short in the reviewers eyes, and I don´t particularly care for his voice either, but he has one very important advantage: He actually looks and acts like someone Waltraud Meier´s Isolde could fall in love with. Particularly his third act was moving. And I cannot readily think of any of the contemporary Tristan´s that would have been as or more convincing physically. For that, I´ll gladly accept his vocal shortcomings.

At least when René Pape is not around, Matti Salminen is the optimal King Marke. He has exactly the right mixture of a both grand and sorrowful presence, as well as a voice in fine shape making a quite touching monologue. Gerd Grochowski was fresh-sounding as Kurwenal, but his voice seemed rather small. The only one that actually did disappoint was Michelle DeYoung´s shrill sounding Brangäne. But she could not take anything away from the magnificent achievements of the others.

A truly grand operatic evening. I sincerely hope I´ll live long enough to experience something like it again. 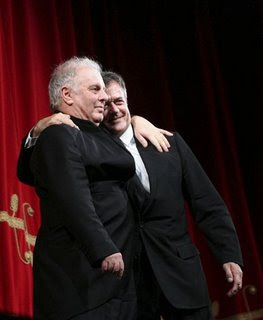 Thank you for this review, which I happened to read today after the sailor's song 'Westwaerts weht der Wind' came into my head this morning out of nowhere. The word 'iconic' is used very freely today but Tristan really is.

I finally saw (most of) the HD film version of this production at a city cinema yesterday and cannot help but agree with you about the wonder that is Meier's Isolde and the beautiful and highly intelligent Chereau production. The moments that stay with me are Isolde echoing Tristan's bow to her from Act 1 with her own bow as they are about to be parted at the end of Act 2 and the wild embrace in front of the sailors at the end of Act 1. And I have to agree Ian Storey is the best looking Tristan I have seen - I thought his voice uneven in Act 1 but settling into good shape in Act 2. Alas the cinema projector broke down in the second intermission and I didn't see Act 3 - making a judgement of this performance impossible! And on a footnote, Salminen's monologue in Act 2 was absolutely stunning. This is a moment in the opera where I usually sit back until the drama revs up again, but Salminen had me on the edge of my seat and nearly in tears (you're right about the gut wrenching embrace he and Tristan share).

I'm going to buy this thing as soon as it is released....
I'm portuguese, I remember seeing Jeannine Altmeyer as Isolde in our national opera theater here in Lisbon not so many years ago (she had done Sieglinde with Chérau and Boulez in THAT Ring in Bayreuth), conductor was some local if I remember, Tristan was Carlo Bergonzi --- not his finest hour, if you know what I mean --- and when the 'Liebestodt' was over all we in the theater had tears on our eyes, I would bet my livelihood on it.
Tristan und Isolde is my favorite opera and there's nothing better as a sort of 'foreplay' as the Wesendonck Lieder.

Cheers and congrats from Sintra -- PT :)

Hey, I'm really sorry for an opera lover this can't happen. Please read 'Liebestod' where I wrote some other thing.

Again my best for you and for having this wonderful site.

It is interesting to compare what you wrote about W. Meier to what has been written by Robert Levine:

"Many observers who know and care about such things consider Waltraud Meier to be the world's greatest Isolde and Kundry; I would agree if beauty or quality of voice did not matter so much. Yes, she is a great actress and a beautiful woman, sensationally insightful; her reactions are as honest and "real" as her actions. She presents a complete character--enraged, loving, obsessed, filled with sorrow and then seen in a state of almost incredible grief.

But her voice, never lovely, is now truly unreliable. I've put up with her "unlovely" (let's say) singing for years because the voice has plenty of character, but now each phrase carries a new awful surprise. There are about seven reliable notes in her range, those that can do whatever she'd like. The others are sometimes shrill, sometimes flat, sometimes just truly unpleasant. Anything above high-A is open season for squeaks or squawks. And she flattens during the Liebestod and ends it on a truly sour F-sharp. Opera remains first and foremost about voice, and Meier's is failing her more and more. She now officially gets an A for artistry and a C for sound."

One can rea the full review here:

I am left wondering about Robert Levine's very snarky review. It seems to be an almost personal thing when he writes "But her voice, never lovely" implies that he has never cared for her and sees her as overrated Wagnerian opera singer, although (and this is important) she's good at acting.

Well, we must all remember that Robert Levine is NOT the arbiter of taste when it comes to singing or any other art form, but rather he is expressing an opinion. Sorry, Mr. Levine, you are outnumbered in the extreme by other critics who praise Meier's performances as 'definitive'. Were you smoking something when you wrote your review?