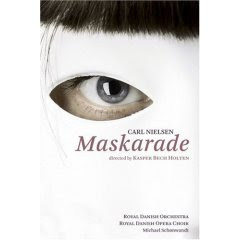 This new DVD release of the unofficial Danish national opera Maskarade is a most welcome addition to the Maskarade discography, which previously consisted only of Pountney´s Bregenz production.

Kasper Bech Holten´s production is definitely modern in the outlook and may not appeal to all. I must admit I find it both very refreshing and very funny and have previously described it in detail. I actually participated in one of the performances of this 2006/7 season run of Maskarade at the Royal Danish Opera, though unfortunately not the performance seen in the final DVD release.

There simply is no point in producing Maskarade if you do not have the right singer to play Jeronimus, the conservative archetype and main protagonist: Until his death Aage Haugland literally owned this role, which he also recorded on the brilliant 1998 recording with Ulf Schirmer and Danish National Radio Symphony Orchestra.
Now the torch has passed on to Stephen Milling, who has the exact combination of commanding stage presence and vocal strength to convincingly play this anti-hero with the exact balance between comical talent and dignity, a prerequisite in a great Jeronimus.

The entire cast is very strong, especially Johan Reuter as Henrik has a very convincing comical talent as does dramatic mezzosoprano Susanne Resmark as Jeronimus´wife Magdelone.
Superb playing from the Royal Danish Opera orchestra and Michael Schönwandt . Compared to Schirmer´s 10-year old recording, Michael Schönwandt has a slightly more heavy approach to the score, which suits it rather well.

There are moments of both Falstaff as well as Rosenkavalier and Meistersinger in Carl Nielsen´s score, though Carl Nielsen has succeeded in combining the above qualities with a wide public appeal in a way that none of the above composers (perhaps with the exception of Verdi) succeeded in doing.

The camera angles are switched very frequently with many shots of the orchestra players and conductor during the performance. Does it work or is it irritating? I am not sure.

Excellent bonus section with a behind-the-scenes view of the preparations as well as an interview with Michael Schönwandt explaining the plot.

Also a very informative booklet with an extensive information on the history of Maskarade. Perhaps some of the biographies would benefit from an update, such as the otherwise very detailed biography of Stephen Milling, which seems to stop at his performances at La Scala in 1999 in a secondary role, with no mention of his later Metropolitan performances (Hunding and Sarastro) or those at Covent Garden and Wiener Staatsoper (Parsifal), his career highlights so far.