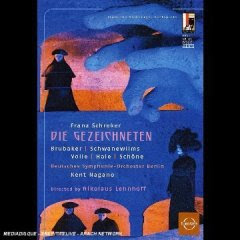 Die Gezeichneten (tr. "The marked ones") is a dark and disturbing opera written by Franz Shreker in 1918. A late-romantic work with lingering, unreleased harmonies and an eerie atmosphere not unlike Verklärte Nacht.
The plot is both rather stupid as well as lenghty to explain, but involves a hidden grotto, kidnapping, a secret brotherhood, a woman who will die if she loves a man, a rich Duke and a hunchback.

As I am concerned, this is probably veteran director Nikolaus Lehnhoffs best production to date and was rapturously received at the premiere at the 2005 Salzburg Festival: Staggeringly beautiful as well as eerily atmospheric, devoid of the static impression often associated with his productions. Dark and brooding, like Shrekers densely textured score making excellent use of the intrinsic arches of the Felsenreitschule, the set is one gigantic, reclining female statue, under which the hidden grotto is to be found. Transvestism explains Alvianos outsider status in society, and Lehnhoffs exposure of pedophilia, upon opening the grotto is tremendously gripping, even by today's standards.

Those familiar with the score may note that some cuts, most notably in Act 3 of about 20 minutes have been made, allegedly to simplify the story-line.

Wonderfully played by the Deutsches Symphonie-Orchester Berlin conducted by Kent Nagano. Fine soloists in Anne Schwanewilms, with a cool soprano perfectly fitting as Carlotta. Michael Volle is a rugged Vitelozzo and Robert Brubakers Alviano is both pathetic and moving.

Indeed this is one of the best opera productions of the entire DVD catalogue.