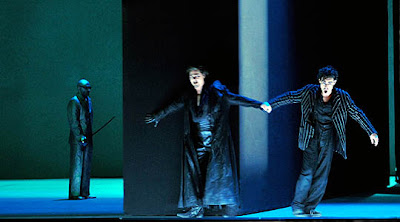 After the December 15th premiere of Peter Mussbach´s production of Don Giovanni at the Berlin State Opera, which I reviewed here, this Tuesday performance was the first performance of the run with a cast almost identical to that of the premiere, the only difference being the indisposition of Christoph Fischesser as the Commandant, replaced by Andreas Bauer - both fine.

In brief, this was simply a far superior performance. Especially since the tempi issues between especially Daniel Barenboim and René Pape had been sorted out, and the nervousness of René Pape, which affected the entire cast at Saturdays premiere was gone. Especially Annette Dasch, who disappointed in the premiere, delivered an excellent performance, on a level entirely different compared to four days ago: Vocally secure as well as dramatically captivating.

That these orchestral timing issues, which plagued the premiere, may be fixed so rapidly, confirms my suspicion that this Don Giovanni was indeed under-rehearsed due to Barenboim´s La Scala commitment. Principally I don´t see any problem in having your assistants run the rehearsals, but when the tempi then turn out to be radically different when the maestro is on the podium, then you get the result you got Saturday: An unsynchronized performance. Apart from that, Daniel Barenboim really does conduct the Mozart of my dreams as described in my report from the premiere.
Posted by mostly opera... at 14:39