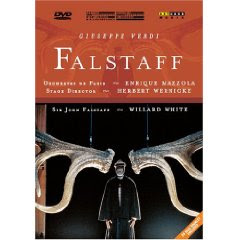 Fist of all, this Falstaff is no comedy. For once, Falstaff is not the laughable, fat figure.
Willard White´s Falstaff is a virile, somber man, being ousted by society. Why, the staging does not reveal, though the accompanying booklet states this to be racially motivated, as Willard White is the only black man on stage. Though the racist angle is not obvious from watching the minimalistic staging, which take place in a single room lined with wooden walls with the characters wearing period costumes. Admittedly, there is a certain 19th century Southern State feeling to this production, though I may not have had this impression had I not read the racism comment in the booklet.

Willard White is a superb stage actor, who plays Falstaff like he was Filippo of Spain. Though his voice is rather dry, it doesn´t really detract from his fine performance. Small wonder Charlotte Hellekant´s fine Meg has an affair with him.
Of the others, Miah Persson shines as Nanetta, while her upcoming husband is more anonymous. Geraldine McGreevy unfortunately does not make a good Alice Ford, being rather shrill and devoid of charm.
Neither does Enrique Mazzola really make the orchestra bubble, though bubbly may not be an aim to this almost tragic Falstaff.

The DVD direction is of unusually low quality, often the camera focus on singers not relevant to the action. Distinctly similar to the appallingly poor filmed Zurich Tannhäuser, and as it turned out, the DVD director was the same: Chloe Perlemuter.