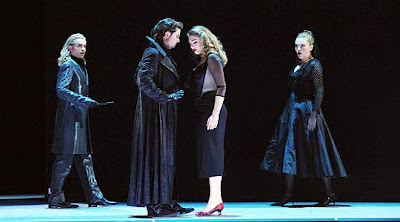 That this Don Giovanni was underrehearsed may surprise few, considering Daniel Barenboim is conducting the La Scala season opening production of Chéreau´s new Tristan and Isolde simultaneous with this Berlin State Opera premiere of Peter Mussbach´s Don Giovanni. That La Scala obviously received the major number of orchestra rehearsals with the maestro is understandable, though to sit through this rather uncoordinated affair in Berlin was nevertheless frustrating.

Particularly as this production has a virtually perfect protagonist in René Pape as Don Giovanni. René Pape has everything a great Don Giovanni needs: Beautiful, unrestrained singing, dramatic punch, semi-diabolic as well as lofty stage appearance and perfect diction. Here, in addition, he was visibly nervous, fully understandable as Daniel Barenboim repeatedly set different tempi than Pape did, worst in the Champagne Aria, where Barenboim was way, way too fast. As it now seems that the La Scala Tristan performance tomorrow (December 16th) is cancelled, may I suggest Barenboim uses this unexpected spare time to sit down with René Pape and agree on the tempi?

Precision issues apart, Daniel Barenboim´s Don Giovanni is shattering. For once, no Mozart light. Instead we are treated to the full-bodied Mozart orchestra in the 1950´s Salzburg tradition of Furtwängler and Böhm complete with heavy strings and slow pace. With the poignant death-scene being the absolute highlight.
Of the remaining singers Hanno Müller-Brachmann´s Leporello was excellently sung as well as providing fine dramatic contrast to Don Giovanni and especially Pavol Breslik stood out as Don Ottavio. Anna Samuil was a fine Donna Anna, with a clear,very distinct soprano and effortless coloratura and Arttu Kataja and Sylvia Schwartz made a fine Masetto/Zerlina constellation. To me, though judged on the audience response I hold a minority opinion, Annette Dasch disappointed as Donna Elvira: I found her sound very nasal, at points shrill and hardly audible in half of her entrances. Though she is a superb, dynamic stage actress.

Peter Mussbach´s production was shown last year at La Scala and the booing and bravos more or less equalled out each other at this Berlin premiere.
Admittedly, Peter Mussbach´s concept is not overly inventive. It is, however, both stylish and simplistic: Black walls moving on a blue background. And nothing further, except for the occasional scooter, on which Donna Elvira makes her entrance.
That the music is not overshadowed by all sorts of irrelevant stage actioni is a definite plus. However, at no point was it clear what exactly Peter Mussbach wanted with the piece as the characters seemed left to their own devices running around the set. Almost like a concert performance. Though it did look great.

In the programme notes you may read that Mussbach´s Don Giovanni is not an evil person. On the contrary this Don has been living an egoistic and thoughtless existence for a long time and his life changes when he (accidentally?) kills the commander, thus entangling himself into more and more complex situations, which in the end lead to his downfall. Somehow, a few additional ideas would have helped lifting the on-stage drama. As well as some additional rehearsing time with Daniel Barenboim.

Photographs from the company website
Posted by mostly opera... at 00:18