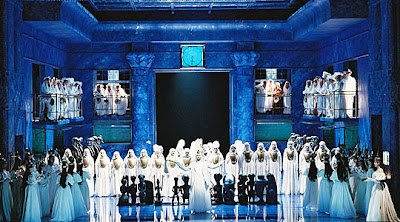 Did you ever walk around the Egyptian section of a museum such as the Metropolitan, the British Museum or even the Egyptian Museum in Cairo, looking up at the massive sarcophagi and statues, imagining them comimg alive? This is exactly what happens for Radamés in Pet Halmen´s production of Aida at the Berlin State Opera:

The opera is set in Verdi´s time: Radamés is the typical British official temporarily assigned to Egypt. While lingering at an Egyptian museum with fellow upper-class British citizens, he clasps a sarcophagus (which in the end will contain himself and Aida) and Amneris and the King step out of golden statues. The whole spectacle is Radames´ dream. Very aesthetic and accompanied by beautiful set designs, also by Pet Halmen.

Aida is a difficult opera to stage: It often doesn´t come out well ”modernized” and more often than not, attempts to recreate Egyptian splendor look plainly ridiculous. In this respect, this production is rather successful and the idea of Radamés dream worked out well. What is lost is the interpersonal drama, perhaps also to be at least partially blamed on the casting. While no-one fell through, none was exceptional either.
Conducted by Dan Ettinger the Staatskapelle sounded hollow and without subtlety. I suppose there just is a major difference between when Daniel Barenboim is here (conducting) and when he is not.
Posted by mostly opera... at 13:18

I saw this production of Aida in Berlin a couple of years ago, with Waltraud Meier as a phenomenal Amneris. It's a great production - and I enjoyed the concept very much.

I completely agree - and I wish I had hear Waltraud Meier as Amneris, especially since it now seems she has given up the part.