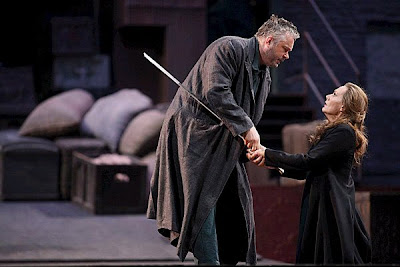 Tristan and Isolde, La Scala, December 7th. Chéreau (p), Barenboim (c). Isolde: Waltraud Meier, Tristan: Ian Storey, Marke: Matti Salminen, Brangäne: Michelle DeYoung, Kurwenal: Gerd Grochowski. Further information here.
Tremendous success especially for conductor Daniel Barenboim in the premiere of Patrice Chéreau´s staging of Tristan and Isolde, which opened the season at the Scala opera in Milano this evening. Major Italian newspapers La Repubblica and Corriere della Sera report on 13!minutes of applause, particularly for Barenboim. Before the performance started, one minute of silence was held to commemorate the death of 4 workers in a recent accident in Torino.
Also a prime social event, where the Presidents of Germany, Italy, Austria, Greece and the Emir of Qatar were present as well as 19 foreign government ministers, 3 Italian ministers and several high-ranking church officials were present (according to Corriere della Sera).
A small group of theater workers apparently protested outside the theater.

Several of the VIP guests were interviewed by Corriere della Sera ( my translation):

For President of the Republic (Italy) Napolitano it was "an extraordinary performance, truly sublime. A magnificent spectacle." An Italian Minister Rutelli has stressed the "very high level" of the work. Enthusiasm also from the Chairman of the Region, Roberto Formigoni, calling the work "spectacular" and said he was sure that this was supposed to be yet another "business card" for the candidacy for the World Exhibition of 2015.

Some, however, criticized the set design: The Senator for Culture in Milan, Vittorio Sgarbi, described the sets as "inappropriate, unjustified and communist". Even former Public Prosecutor in Milan, Francesco Saverio Borrelli, releasing a comment at the end of the first act, saying he was "very pleased, but he must emphasize - only from the point of view of the music. The set design he did not understand: What the Aurelian walls were about, and that ferry. Also the final rolling around of Tristan and Isolde is not according to Wagner, where love is essentially spiritual."
After the performance, the Municipality of Milano according to tradition had organized a reception for 900 people at the Palazzo Marino.
Reviews here.
Posted by mostly opera... at 00:14

Thanks! I realized it this morning too..I suppose I was just too tired yesterday when translating this. 30 minutes applause did sound good though..

I listened to the performance by broadcast, with my Eulenburg score at hands. Perhaps since Victor deSabata in the early ‘50s (according to the records) such a Wagner was not heard at LaScala. Thanks to Daniel, we can have a “mitteleuropean” House, out from the “italian-provincial” stereotype.

Storey, after suffering for more than one defaillance in the first 2 acts, where he missed almost all As, pulled a fantastic (“delirant” indeed) third, so to gain reputation as a future “prime-choice” for the role.

Meier is still “the Queen” of Ireland, and Salminen is like our good wine: improving with age!

(I will comment on Chéreau, Peduzzi & Bickel after seeing with my eyes: the general reactions here are mixed, with prevalence towards the negative)

I find it really hard to believe that this production only got 13 minutes of applause from warm-blooded Italians. Very strange.

At least that is what the Italian papers said. Maybe they thought only of the orchestra. The day I was there (December 20th) there definitely was more than 13 minutes over-all applause...