Vienna: New Walküre in which Uusitalo looses his voice 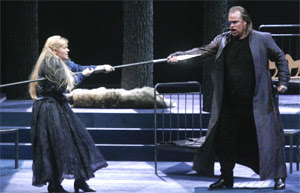 A nightmare for Finnish bass-barytone Juha Uusitalo: At the premiere of Walküre, the first installment of the new Ring at the Vienna State Opera , Uusitalo was apparently singing with a cold and lost his voice during the Monologue. In the third act he could only whisper, and Oskar Hillebrandt, seemingly in the process of eating a pizza at the Westbahnhof, was brough in to sing the remainder of the part. Terje Stensvold, an excellent Wotan, is scheduled as Wotan in the next performance on Thursday.
The production is by Sven-Eric Bechtolf. Franz Welser-Möst conducts. The cast: Nina Stemme, Eva Johansson, Juha Uusitalo, Johan Botha and Michaela Schuster.
Reviews:
Der Standard thought the staging to be uninspired and naive in the conception. However particular praise to Johan Botha and Nina Stemme as the Wälsung twins.
Financial Times also was rather unimpressed with Bechtolfs staging, but even less impressed with Holender´s tackling of Uusitalo´s lost voice. Quote:
"Holender was greeted with storms of boos, a reception not inappropriate for a man who had failed to organise an understudy for the opera’s heaviest role. He held up both hands and talked. When he had hired Uusitalo four years ago, the man had been in fine voice. He has sung the role well in other houses. He was fine at the dress rehearsal. He, Holender, had advised Uusitalo to be more careful with his voice in the last rehearsals. Oskar Hillebrand had answered his mobile phone and agreed to sing the part from the pit, while Uusitalo acted his role silently on the stage, a solution that he, Holender, did not especially like, but what else can you do with such a production?The boos were tamed, but the cost was high. Uusitalo was just having a bad night. It can happen to anyone."
Posted by mostly opera... at 22:50

Hi. Just a couple of points about Wlakure at the VSO - I heard it on the radio. Two things struck me. First that Juha Uusitalo sounded very much like Hotter at times - sad that he faded, it was good to begin with. Second, I though that Johansson was fearfully off-pitch at times and had developed a Gwyneth Jones wobble you could drive a train through. She must be careful and should, perhaps, be singing Donna Anna a few times a year just to keep herself in check. This may be a Mozart free blog-site, and I am a great Wagner (et al.) devotee, but the discipline required by Mozart - and why not some Back while she is at it - is a great reality check for singers.

Thanks for commenting! Yes, I´ve heard others say that Eva Johansson was booh´ed at the premiere. I´m quite disappointed to heard that, since I have been following her career since I was a small child and really like her.
Regarding the Mozart-free site: I´ll have to make an exception myself, since I am going to the Don Giovanni premiere in Berlin (a compromise, and I´m only going because René Pape is in it....)

Sorry for the typographical errors - will do better in future!
The Walsungs were fine, particularly Botha who seems tireless.

Don´t worry - and thanks again for commenting...