Natalie Dessay and Laurent Pelly disappoints in Pelleas and Melisande 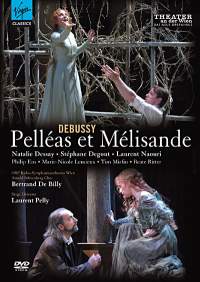 How does one evoke the otherworldly ambiance of Pélleas and Mélisande? Not easily and I have yet to see a staging which does full justice to the work, though a few do come close.

The french director Laurent Pelly is well-known for straightforward and fast-paced productions such as  Donizetti´s Filledu Regiment and Hänsel und Gretel, both released on DVD. Not an obvious choice to stage an understated, introspective work such as Pélleas and Melisande. Thus, it is not unsurprising that Laurent Pelly seems a bit at loss with this opera that thrives on understating rather than the opposite. By Pelly´s usual high-paced standards, however, the production really is very tranquil. Departing from realism, he has created a rotating stage containing a mix of columns, rocks and the occasional chamber, in effort to create an alluring, ambiguous environment. However, for me, the allure remains absent throughout not the least due to Nathalie Dessay´s Mélisande.

No wonder Laurent Pelly is Nathalie Dessay´s favourite opera director, as they share a lot of qualities: She is a straight-forward, face-paced singing-actress and the role of Mélisande lies relatively well for her with much beautiful singing in the middle section,of her voice. But she cannot hide that her upper register is in ruins and whatever her qualities, understatement and allure are not her strong points. Just in recent years I have heard much superior Mélisandes in both Copenhagen (Elisabeth Jansson), Berlin (Magdalena Kozena) and Paris (Elena Tsallagova). And then there are the ones on CD such as Frederica von Stade, just to mention one.

Stéphane Degout with his rich voice and wonderful introspective way is the ideal Pélleas, but he is not helped by Laurent Pelly´s production.

Best is Laurent Naouri Native French-speakers in major parts. Best are Laurent Naouri (real life husband of Natalie Dessay) in excellent voice with an sufficient underlying menacing air of both menace but also desperation to him that one feels with him and the unfortunate choices that he makes.

Bertrand de Billy captures the moods well but again I have both heard and seen far better in recent years (Simon Rattle, Philippe Jordan and Pierre Boulez on DVD).

I don´t believe the market for Pélleas DVDs has been exhausted with this release. In fact, one of the best stagings I have seen was that of Robert Wilson in Paris a couple of years ago – a static, beautiful staging capturing the moods almost to perfection and with the wonderful Elena Tsallagova as an otherworldly Mélisande matched by Stéphane Degout as Pélleas. Hopefully this will be released on DVD at some point.

I have been dying for a decent dvd of this, one of my absolute favourite opera. Happily, I have just found out that Wilson's w/Degout staging will be released on Naive at the end of April. Now we start shouting for a dvd the Guth staging from Frankfurt with Gerhaher.