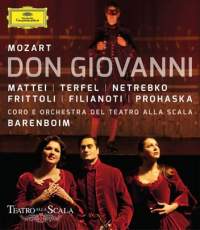 The opening is entirely stunning: As the initial two chords of the ouverture fill the auditorium, Peter Mattei runs up the middle aisle and onto the stage where he pulls town the red velvety curtain to reveal a gigantic mirror, reflecting the entire audience: We are (again I am tempted to say), spectators to our own lives.

Robert Carsen clearly loves this sort of theatre-within-theatre concept, which he has previously used in several productions such as Tosca, Contes d´Hoffmann and L´incoronazione di Poppea, just to mention a few. A concept often more exciting on paper than in reality, it does not seem too imposing here where the production, nevertheless, is very elegant, kept mostly in black, gold and dark velvety red colours.

Don Giovanni is a free spirit. Neither malign nor cunning. Just a man, who lives every moment to the fullest. Perhaps this is why he is the last one standing on stage, while the others characters descend into hell in the end. Live life to its fullest! This Don Giovanni certainly has Robert Carsen´s sympathy. And ours as well, not least due to Peter Mattei, who is, in my opinion, quite simply the best Don Giovanni on stage today, with his smooth, direct approach, his beautiful,  beautiful voice as well as his lofty, charming and ultimately very captivating stage manners.

In general, all the singers are from the A-list and probably the best Don Giovanni cast name-per-name one could dream of assembling. Not all live up to expectations, though. However, the two mail protagonists certainly do and Bryn Terfel equals Peter Mattei in what is in one of his best roles. Terfel has always been a much better Leporello than Don Giovanni, Leporello being his own favourite as well. A rather rough, clumsy character, never failing to catch the eye and his bass-barytone contrasts well with Peter Mattei´s barytone.
This time, the ungrateful part of Don Ottavio is left with Giuseppe Filianoti, who does well without exactly distinguishing himself, though Mozart did not help him much by giving him two entirely placid arias to sing as well as some uninteresting recitatives.

Donna Anna is one of the roles that launches the international career of Anna Netrebko. In this production, she clearly loves Don Giovanni but feels obliged to hide her relation with him after the murder of her father. However, she disappoints, mostly vocally, being frequently off tune and sounding murky. I very much doubt we will see much more Mozart from here in the future.

Barbara Frittoli, replacing  Elina Garanca, was a fluttery, nervous Donna Elvira and though she wasn´t exactly a weak link, and definitely better than recently heard at the Metropolitan Opera, the role does not seem to lie well for her.
Up-and-coming Anna Prohaska and Stefan Kocan were sufficiently engaging as Zerlina/Masetto while I would have preferred a much blacker sound for the Commendatore than what Kwangchoul Yun possesses.

Daniel Barenboim´s relationship with Don Giovanni began in 1953 when he assisted the cembalist in a run of Furtwängler-conducted performances. Thus it should comes as no surprise that Barenboim conducts in the style of Furtwängler and Klemperer, lightyears from the period-specific approaches some may prefer today. Not me, though.  About 5 years ago in Berlin, Daniel Barenboim conducted the best Don Giovanni I have ever heard live and again here at La Scala his broad, slow tempi and his unfailing sense of the contrapunctual elements of the score was thrilling.