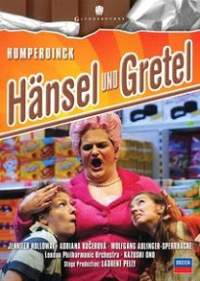 As you press “play” on the DVD, a cardboard box is brought to the Glyndebourne Festival House during the Vorspiel and eventually passes through the hands of all the singers, thus presenting them for the viewer. For the audience present in the auditorium all they see is the front cover of the cardboard box. So what is inside the box? Well, the house of Hänsel and Gretel in fact. As Act 1 opens we are introduced to their poor home inside a humid, degrading card-board box. As a matter of fact there is a lot of trash in this production, quite literally speaking. Laurent Pelly, most well-known for fast-paced productions like Fille du Regiment, has created another fast-paced production, this time emphasizing consumerism and excess.

The siblings are the most authentic I believe I have seen, constant at play, jumping around the set. The transformation of Jennifer Holloway, a quite feminine singer into Hänsel is impressive. Equally impressive that Adriana Kucerova manages to look a 10-year old.

Laurent Pelly explicitly wished to expel all signs of religion from the production and in the end when God is praised, instead the parents take plenty of goods from the supermarket. An ironic ending, a submission toconsumerism, Pelly  says, but somehow I miss the point: If they are a poor family, constantly hungry, why is it ironic that they take food from the supermarket when they can? Never mind, the production is both funny and lively and I was excellently entertained throughout.

There is plenty of Wagner in the score, I was reminded of both Rhinemaidens, Giants and Parsifal, and Kazushi Ono brings all this out in a convincing reading.

Not to be missed: Watch the impressive Wolfgang Ablinger-Sperrhacke as the witch: