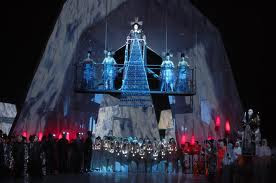 This may be the most spectacular opera production you will ever see. Taking the references to Turandot as an Ice Princess very literally, the Fura dels Baus has created something which may well be re-used as an an opening show for the 2014 Winter Olympics. 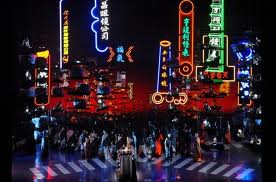 According to Carlus Padrissa, the inspiration to this staging came from a journey to China. Set in 2048, China has bought Europes debt and Turandot is now ruler in Europe. The people are happily working to pay off the debts of their forefathers. This is what Carlus Padrissa says. This is not what you see on stage, however: On stage you see a splendid/excessive/superfluous futuristic Chinese stage show in a winter world. I was looking for some repressed Europeans or ethnic diversity to support Carlus Padrissa´s Europe vs. China claims, but everyone looked Chinese. 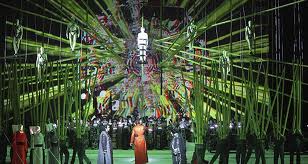 Other than that, Padrissa also speaks about Liu and Turandot being like Ying and Yang as well as the opera having a positive ending as Turandot is “melted” by Lius death. This is not immediately apparent from the staging either, however Liu does die quashed by green bamboos, a sign of the appearance of a positive force, life emerging when the ice is thawed.

This production ends where Puccini´s original score ends – ie. with Liu´s death, thus Padrissa rejected any of the later composed endings arguing that masterworks may be more complete without artificial completions. A reasonable point of view with which I neither agree nor disagree.
To be seen on stage: A massive ice skating rink, ice hockey games, splendid video projections, the all-seeing Turandot within a massive eye, strange costumes, a blood-red sunrise, a moving mountain of skulls, neon-signs and glitter everywhere. As well as several 3D elements, preceded by warning signs on the subtitles and administration of 3D glasses to the live audience. Personally I have never seen anything as spectacular as this on the opera stage. Far, far more spectacular than any of their other stagings, such as the Nibelungen Ring or Les Troyens. I cannot imagine that this will not be released on DVD at some point as well.


Some hated it, calling it superficial. Had it been Parsifal, I would (perhaps?/probably?) have agreed. However, Turandot is very much as an exotic fairy tale, something to be entertained by, which Fura dels Baus certainly achieves with this staging. Personenregie is not really what Fura dels Baus is about and some (who obviously did not like the show) called this a sort of Zeffirelli production of our time. Perhaps in 30 years of time, when it has been played as long as some of Zeffirelli´s productions, entirely overstaying their welcome, I may agree. But for now it remains truly spectacular, though those seeking depth and research into the motivation of the characters may be well advised to look elsewhere. 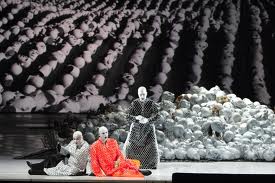 Amid all this splendour you may almost forget the singers, none of whom were exceptional, unfortunately. Irene Théorin seemed to have an off day not sounding really pleasant. While Yonghoon Lee with his Asian looks seem a perfect fit for Calaf, the role seems a number to heavy for him. Serena Farnocchia sang nicely but did not leave the impression Marina Poplavskaya did a couple of years ago and Marco Armiliato was neither exceptional nor bad.

But no-one really watches this production to watch the singers. It is the 2014 Olympic Games Opening show that people want to watch.

You were right. It didn't work with Parsifal. The Premiere was in Köln on the 29th of march. A complete disaster. Wagner (Titurel ) 's  corpse, in an orange shroud marked " gesamtkunstwerk ", hacked in pieces, cannibalized and emasculated by Niezsche (Amfortas ). Kundry transformed in a tree, then swimming naked, in a big graal plenty of blood, around Shiva's lingam. Things moving to and fro, right and left, without any meaning... Nietsche's quotations projected on the stage...  Maybe they tried to be Stefan Herheim or Claus Guth, but they failed...

An exhausted Salminen, a Boaz Daniel without projection, a pale Parsifal, a ridiculous Kundry with a tiny voice just tolerable for an operetta, and a complete absence of musical tension in the orchestra...