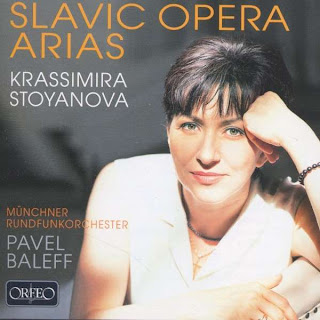 Krassimira Stoyanova: Slavic Opera Arias, 2011.
Bulgarian soprano Krassimira Stoyanova had a rather late start to her career; born in 1962, she is as violinist as well, and played in 3 different orchestras before embarking on her singing career in 1995. Perhaps this is why she, 48 at the time of recording of the present CD is as fresh-voiced as ever. A long-time favourite of the Vienna State Opera where she is Kammersängerin, she has appeared extensively in all major houses and there can be no doubt, that despite flying somehow below the media radar giving very few English-language interviews, she is one of the greatest lyric-dramatic soprano in present time. Her limited discography does not reflect adequately upon her talent. She has released a few solo CDs, all recommendable, but this, the present one "Slavic Opera Arias" is the best. On DVD she may be seen as Desdemona and Tatjana as well as Rachel in La Juive.

Her voice has a rather square voice, and while some may find it lacks bloom when compared to someone like Anja Harteros, it is firmly centered in the middle register, as well as being equal throughout the range. Furthermore her intonation is spot-on, at least on this CD. Ideal for this repertoire of Slavic Arias, of which some may have seen her live as Tatyana - on DVD in Stefan Herheim´s Amsterdam production and live/screened in Kasper Holten´s recent (2013) production for the London Royal Opera.

She is scheduled to sing the Marschallin in the new Rosenkavalier in Salzburg in 2014, an offer she received after her critically acclaimed debut as Ariadne in Vienna a couple of months ago. More Strauss or Wagner in her future? I hope so, but a look at her website reveals Trovatore-Leonora, Marguerite and Amelia (Boccanegra) as well as Aida and Manon Lescaut.

Her next album will be recorded this summer featuring verismo arias.

How to get it?
THanx, Alessio

Your website is wonderful. Thanks. Can you help us find a performance of "Die Walkure" anywhere in the world between January and April of 2014? One of us, a teacher, has those four months off work. We want to see that particular opera, and better if it's in a foreign country but we'll take the US if necessary.
Peculiar requesst, can you help? THANKS

you can go to operabase and search for an opera, it will give you listings:

If you search Dei Walkure, you get:

Super, thanks for the info.