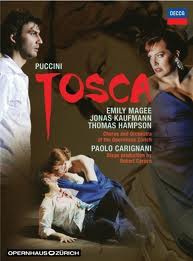 Another production-within-a-production, which Robert Carsen likes so much, as evidenced by his previous stagings of works such as L´incoronazione di Poppea, Don Giovanni and Contes d´Hoffmann. While this type of staging may not seem entirely inappropriate for a diva-esque play like Tosca, it nevertheless defuses some of the tension inherent in both music and libretto.

We begin in the empty audience in front of an empty stage: That is, we look at an empty auditorium in front of an empty stage, the real audience being, obviously, seated in the audience...
Cavaradossi paints on the wall of the theatre (Act 1), is tortured in a chamber adjacent to the stage (Act 2) and finally dies on the centre stage (Act 3). Carsen succeeds in creating a film noir atmosphere, which admittedly is a little bit too artificial for my tastes: Just take the freezing cuts in the middle of the otherwise very intense Tosca-Scarpia scene, placing Tosca directly under the spotlight, while completely defusing the tension between her and Scarpia. Clearly a matter of style outranking matt

Some may want to buy this DVD on the strengths of Jonas Kaufmann alone, completely understandable as he is the best Cavaradossi I have seen, on stage or on DVD. However, unless you want to own two DVDs with Kaufmann as Cavaradossi, the one from London with Angela Gheorghiu and Bryn Terfel is the better choice.

However, the cast is as fine here in Zürich as anywhere, and while Emily Magee is a bit mature as Tosca she has the appropriate diva-like manners and the role lies well for her.

I like Thomas Hampson´s elegant Scarpia, though he occasionally seems to lack a bit of bite. But rather refreshing seeing a production which avoids turning Scarpia into a monster.

Carignani is on top of things in the pit and there is plenty to admire in this stylish production, though, at least for me, it is not the first choice.