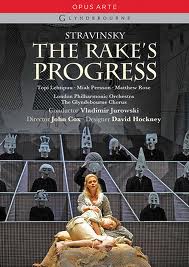 This production has in many ways become a benchmark for The Rake´s Progress. First seen at Glyndebourne in 1975, it has undergone numerous revivals and has even been released on DVD in 1997 featuring Samuel Ramey and Felicity Lott. While the present version looks a bit fresher, I don´t see any compelling reason to acquire this present DVD if you already own the previous one.

No doubt the reason for the popularity and longevity of this production is the extraordinary accordance between the production and Stravinsky´s original work.
Stravinsky was originally inspired by 1) Mozart and 2) William Hogarth´s 1735 series of eight paintings (later engravings) depicting the life of Tom Rakewell. As most will know, the composition style is neoclassical - Mozart, but not quite Mozart. As for the story line - Don Giovanni but not quite Don Giovanni.

The director is John Cox, but the trademark of the production are the designs by David Hockney. Hockney is a British multi-artist, born in 1937 and famous for his pop art installations in the 1960´s.
He was equally inspired by William Hogarth in creating the sets, which are quite often print-like black and white, with multiple stripes and crosshatching. Complete with period costumes, it is a set evocative of Mozart – but then, just like the music, not quite Mozart. And always with a certain irony and distance, to be found in Stravinsky´s score and the libretto as well.

The “new” singers are all excellent: From Miah Persson´s Anne Trulove, which is both beautifully sung and acted, to Topi Lehtipuu´s convincing portrait of the lazy Tom always seeking the easy way and Matthew Rose as a somewhat ironic Nick Shadow and finally Elena Manistina´s tour de force as Baba The Turk.

Vladimir Jurowski is effective conducting a score, that I find it easy to admire but hard to love.