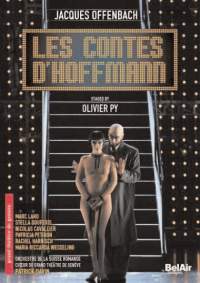 
The set consists of interchanging frames, blinking neon lights, plenty of grotesque naked figures, black masked men, skeletons, naked body suits (Olympia), coffins with dead bodies (Antonia and her mother), a luxury whore in a dark brothel (Giulietta), murderers (watch Hoffmann in the last act). In short: Plenty of death. Much, much darker than his Lulu but as sheer dark imagination goes not unlike his version of Tristan and Isolde, in which both commit suicide. Darkness aside, Oliver Py is a rather straightforward storyteller with no obvious “concept” applied.

No version of Hoffmann is alike, and each director has his explanation for omissions etc. Here we don´t have the Scintille diamant, which Offenbach admittedly did not put in there from the beginning. Nevertheless for me a Hoffmann withouth Scintille Diamant is a bit like Die Walküre without Leb Wohl. In any case, choices have to be made. So why not shorten down the first act, as it often tends to drag on quite a bit and the finest music is to be found further on? In any case the macabre atmosphere suits Hoffmann, and I remember well the rave reviews this production received in 2008.
Best were Stella Doufexis as an elegant Muse/Nicklausse and Nicolas Cavallier as the darkly grotesque villains. However, the other ladies were fine as well from Patricia Petibon´s full-toned Olympia, Rachel Harnisch´s repressed Antonia and Maria Riccarda Wesseling as a voluptuous luxury whore in a Venetian-sort brothel. Hoffmann himself, Marc Laho, however was not entirely up to his surroundings and often, but not always however, sounded dry with problems in the top.

Hoffmann as le grand macabre. It suits it amazingly well and this would be my choice of a Hoffmann to own on DVD. If you are put off by all this death, however, then I suggest to take a look at Robert Carsen´s elegant production from Paris.