julia lezhneva with decca solo cd - next superstar or forgotten next year? 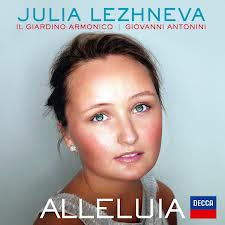 Born in Russia in 1989, from 2008 a student at the Cardiff International Academy of Voice, winner of several competitions and a protegé of Kiri Te Kanawa. Hyped as few other young singers and now releasing her first solo CD under her new contract with Decca after her 2011 disc of Rossini arias released on Naïve. 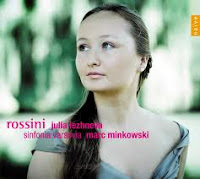 On stage, she appears mostly in concert versions of the likes of La Cenerentola, a well-paced, reasonable programme for a 23-year old, who needs time to grow. When I heard her a couple of years ago in Salzburg in Il Rossignol as the cook, I thought she was superb.


Soprano or mezzo-soprano? Decca markets her as a soprano. Wikipedia says "soprano and coloratura mezzo-soprano". Probably in-between, with a small preponderance towards mezzo, I´d say, however at her age anything may happen. This present disc contains motets by Vivaldi, Händel, Porpora and Mozart.


The positive aspects first: She is 23. How many singers that age can perform like she does? Not many.Her coloratura technique is impressive and especially her middle register is beautiful.


The remaining slightly negative aspects: Whether she is 23 or 86 really is of no importance. This is a CD, and thus she compares with the likes of Sandrine Piau, Arleen Auger, Kiri Te Kanawa and Barbara Bonney, who all have recorded at least parts of the same repertoire, especially the Exultate Jubilate (Mozart K165). And while Julia Lezhneva´s voice is more than pleasant, I find no individuality whatsoever in neither characterization or delivery.

Julia Lezhneva is barely 23 and "one of the youngest artists to be celebrated like this", I read somewhere. Obviously that was meant as a compliment, but what now? She needs (like everyone her age) to grow into an adult, mature artist and that, inevitably takes time. And with initial high-exposure like this, it may not be too easy for her to manage. Really, she does look like a sweet young child on that cover.As always, however, we shall have to wait and see.

However, Cecilia Bartoli was 23 when she released her debut solo CD with Rossini arias in 1989 - also on Decca. The difference between these two at the same age is staggering. Bartoli was clearly an individual performer at 23, while Lezhneva is not.