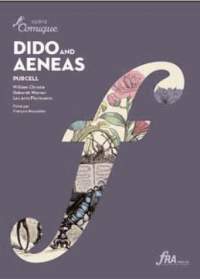 The first known performance of Dido and Aeneas took place at a girls´school in London around 1688. In a superb production combining 17th century with present day, Deborah Warner takes advantage of this fact in an innovative way without loosing scope of the story. A production first seen in Vienna in 2005, later in Amsterdam before being filmed in Paris in 2008.

Not much is left from Virgil´s poem Aeneid  in Purcells version (based on Marlowe´s The Tragedie of Dido), apart from the frame of Dido and Aeneas love story including Dido´s death. Is the idea that Aeneas is tricked to leave Dido by some witches (instead of by the command of Jupiter), perhaps an attempt by Marlowe and Purcell to make his character less noble?

In this case, Christopher Maltman is perfect, as his portrayal is sufficiently ambiguous with more than a hint of uncertainty to give real depth to Aeneas.

However, the real highlight in this production, where school-children enter and exit the stage in various capacities and where past and present is mixed, is the interaction between Malena Ernman and Christopher Maltman. It simply has to seen to be believed and they make one of the most moving couples I have yet seen on DVD. Furthermore, Malena Ernman´s portrayal of Dido is unforgettable and the images rest with you long times after the DVD is back on the shelf.

Veteran conductor William Christie never fails with Les Art Florissants in a production of Dido and Aeneas, which will be hard to surpass.