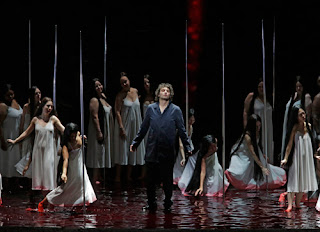 A co-production between The Met, Opera Lyon and Canadian Opera Company, this Parsifal, directed by Francois Girard opened in Lyon in 2012 where the originally scheduled premiere was postponed due to technical concerns regarding the management of the large amounts of "blood", which floods the entire stage in Act 2.
At the Metropolitan Opera the production of Parsifal (which has replaced Otto Schenk´s 1991 staging), starring Jonas Kaufmann, René Pape, Katarina Dalayman, Peter Mattei) opened on February 15th 2013, transmitted in HD on March 2nd.
Discussion of the production in the New York Times. It seems to be something of an event. In any case, I don´t remember ever having seen so rave reviews of any production at the Metropolitan Opera.

A note regarding the live HD transmission on March 2nd:


René Pape in Gurnemanz´ narration (Act 1) from the Met: 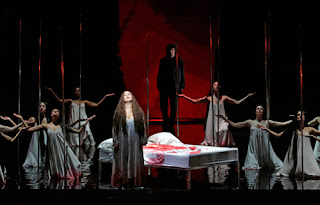 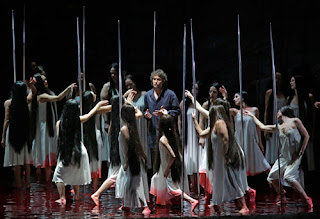 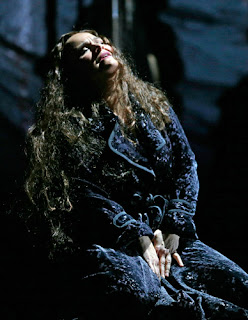 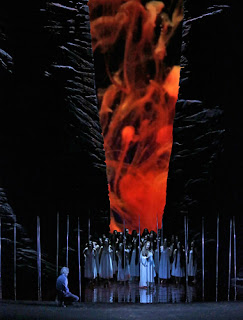 I am quite confused what to expect from this production. Imagery is "nice", but videos reveal, that this will be probably somehow "static production". And as director himself mentioned in one interview - he didn't care much about detailed direction of singers/choir - I think that might ruin the outcome. Let's see the HD transmission.

I saw the Met's new Parsifal this past Monday, Feb. 18, and am happy to say that the rave reviews are true. This production exceeds expectations in every way. It's not exciting, but rather deeply moving and therefore, to me, thrilling. Rene Pape and Peter Mattei shine brightest but Kaufmann is also fantastic as always. Definitely not to be missed. It will go down in my memory as probably the best live opera I've ever seen. Singing of the highest quality you can imagine and then some. Wonderful, wonderful, wonderful.

Stevo, out of context it is a little confusing. What Mr. Girard did is give up autonomy of much of the reactions and movement. He and the choreographer, Carolyn Choa, task the chorus and dancers with finding their own within a codified framework. The men's circle in Act 1 is too long to choreograph and rehearse every step so it is led by an onstage dancer, who is responsible for knowing every note and line of the score and producing the desired reaction according to the vocabulary put forth by the choreographer and director. This allows for the movement to be as flexibe as the music and react to variations of tempo and soloist blocking in real time. This production is definitely not static! It has choreography throughout almost every second of the first two acts and much of the third. Much of the men's movements are butoh-like and meditative, sure, but it is active and engaged in the music and text. Act 2 posseses a more traditionally crafted dance at it's heart, very elegant, yet eerie and sexy all at once. Definitely catch it! Hope this helps.

Grayson, thanks for explanation. I did not want to reply until I see the cinema transmission. And I think I understand what the director wanted to acheive. But I still think that at least 1st act was strange, not because of "little movement", but because I was not able to connect story of music and libretto with action on stage (both video projections and those "generic" gestures of man chorus. Any interpretation hints there?). And maybe also because of quite little interaction and "acting" of singers. Nevertheless, 2nd act was much better and 3rd was also nice (traditional, nothing new there).
Sorry if I sound too critical. Singing was great, orchestra too, everything was nice... And I know that it is not "fair" to judge theather production when I saw it only in the cinema. But in modern opera I expect some drama and "real acting" between characters and stage decorations which have some strong meaning also without their explanation by production team. (for example Herheim's Parsifal in Bayreuth - although I know that many people may hate this production. But I saw it live and it was "overwhelming", at least for me).

Ah ha! I finally "get" François Girard's final interpretive thrust for this rendition :

Parsifal's words (paraphrase of the poem): "The Holy Blood on the spear longs to join the Holy Blood in the Grail cup.

The action: Parsifal inserts the spear tip into the Grail cup, upheld by Kundry, who, on a musical accent (also reflected in a spear movement by Parsifal), will suddenly begin her expiration ritual, leading to a gentle death, while meanwhile, the shadowy ensemble of women who have been ever-pesent but separate from the men, move as individuals to members of the opposite sex, and they all join hands as couples.

My sudden grasp of Girard's interpretation: My goodness! We've got some good ol' Dan Brown going here (Da Vinci Code). The phallic spear and the vaginal cup. All that alternative Gospel of Thomas stuff (Christ married and parental, etc.) and a union of opposites into a perfectly balanced whole (Yin & Yang), represented through the sexual symbolism of the objects at hand. My my! Took me long enough (well, I saw it at the Met 2/21 and from the distance of Dress Circle, one could not see all the details, but seeing it live in HD yesterday filled in the blanks, so i suppose I can forgive myself this untimely lapse of cognition).

I did not like production at all. I almost walked out. I am a fan of the old Weiland Wagner style. This production is not worth the money i paid to see it. They should have copied the Dresden version.

I found Girard's vision made this Parsifal much more relevant for me than the old Met production. The barreness and decay evident in the third act spoke to me of the result of neglecting the spiritual in our lives. The playing out of the Christian symbolism could then carry a broader interpretation of respecting and caring for the sacred in our world.