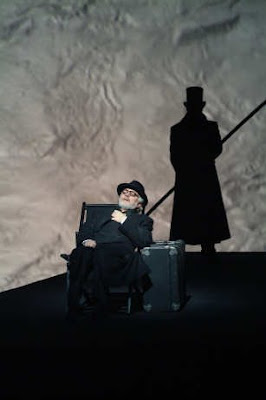 Willy Decker, the outstanding German opera director, has been away from the scene since his Netrebko/Villazón Salzburg Traviata in 2005, and due to illness canceled scheduled assignments such as Moses and Aron and Boris Godunov in Vienna. But now he is finally back. And in superb shape, as well.

In short, this is simply one of the most beautiful productions I have ever seen, but as always with Decker: The aesthetics are not the goal, but only (some of ) the means. His visions are simple in the execution, applying simplistic stage designs and adding a touch of psychoanalysis and symbolism. Combined with a keen sense of just what works in the theater. And with a never-failing emphasis on the dark side. Just take the dominating grand chair symbolizing power in his Boris Godunov. Or the ever-present clock, counting down to Violetta's death in his Salzburg Traviata.

In the present case, few will disagree that Death in Venice is a dark work, and as such, no applications are needed to underline that fact..

This is Britten´s last opera, written in 1973 and closely following the novel by German Nobel Prize winner Thomas Mann. In brief, this is the story of the ageing German novelist Aschenbach (sung by a tenor, originally written for Britten's companion Peter Pears), who travels to Venice and becomes infatuated with an adolescent polish boy Tadzio. He never approaches the boy, but follows him at a distance, and in the end he dies alone on the beach.

The sets are predominantly black and the 17 scene changes melted effortlessly together. The lightning was simply outstanding with varying backgrounds of bright blue clouds as well as undulating white waves and it all started with Aschenbach looking up at a projection of Da Vinci´s (I believe) drawing of the human body in the most beautiful stage show I have seen since I cannot remember when. In one of the most beautiful theaters I have yet been in.

On top Willy Decker shows exactly why he is such an fine opera director, not afraid to deal with difficult issues such as borderline pedophilic issues (this opera is not about pedophilia) in a tasteful and respectful way. I simply cannot imagine a better production of Death in Venice, than this one.

If you want to persuade friends, that opera is NOT elitist - this is probably not the show to take them to. The libretto is profound and saturated with allegations to a degree that deeper immersion is probably essential to fully come to terms with it (read: I don't think I really understand the work, but that may be due to lack of familiarity with it).

It is a fascinating work, but I have the distinct feeling that there are far more layers to this drama, than the one's I am immediately able to grasp, which, by all means, is positive (read: Again, I don't think I understand the work, but that's probably more due to shortcomings of mine, than of Thomas Mann or Benjamin Britten!).

Where I found Sebastian Weigle´s conducting of the dream-team Walküre the day after rather passive (read: It was in fact quite boring), his lucid style of conducting suited Britten excellently. He was absolutely superb, drawing finely woven textures from the very fine orchestra. Far the best I have heard him conduct.

Hans Schöpflin as Aschenbach is virtually on stage for the entire opera and he projected the character well, convincing as both a singer and actor leading a cast with no weak links.

A DVD release of this production would be most welcome. 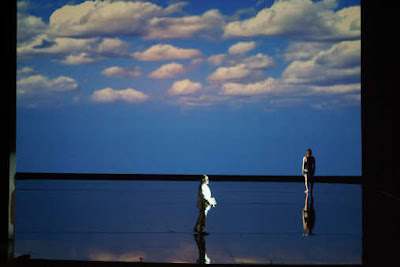 I´m very happy that you enjoyed so much this performance! I totally agree with you that this is one of the most beautiful productions I´ve ever seen in the opera house; to be compared very clearly with Decker´s masterful staging of "Die tote stadt".

I also agree that this is not the most indicated example to convince anyone that opera is not for the elite... LOL. It´s a quite difficult piece even for the most seasoned opera-goers, I think, and many people in the Liceu were saying that the staging was quite beautiful, but the music very hard to follow...

For me, it has been an extremely moving experience, a high point of the season, and the discovery of a masterpiece.

It is wonderful that after viewing magnificent "La Traviata" (Saltzburg, Netrebko, Villazon) my initial impression that Willy Decker is the first who speaks the theatric language of Surrealist painters (Rene Magritte, Giorgio De Kiriko, Paul Delvaux come to mind...)in such a legible and human voice through directing an opera. What strikes me in "La Traviata", which I have watched at least 10 times since I first saw it this spring, is that there is nothing left to a chance or arbitrarily thrown in. Each element speaks for itself in a clear and loud voice and is perfectly woven into the fabric of the whole opus. Long live Willy Decker, a great artist. In Toronto where I live, I can only hope to see his first work after "La Traviata" on DVD. Could someone speak to one of those few DVD production companies to make it available on DVD. After seeing a remarkable film "The Death in Venice" by Luchino Visconti I look forward to savoring the view Willie Decker impress on the music of Britten.

Antonio and Mostly opera, many thanks for your insightful notes. This is a great place for a new opera fans such as me.