The action has now been brought up to present time heavily inspired by the situation on Balkan in the 1990´s. Gunther and Gutrune are white trash and everything about them is cheap - from Gutrune´s bleached hair to Gunther´s general looser-attitude and cheap whisky, which he pours into Siegfried upon his arrival..
Hagen is the mean killer - of innocent civilians as well as of Alberich as soon as he has extracted the necessary information from him. It only seems natural that Siegfried choses Gutrune - an 18-year old knowing nothing of the world, having not chosen Brünnhilde himself, now suddenly with all these possibilities..
And it is only towards the end of this Götterdämmerung that the core concept of the entire production emerges as we now see Brünnhilde in the attic (as Gunther and Hagen have left to kill Siegfried) striking the match as she did in the beginning of Rheingold - the four operas representing a flash-back through her past history in an attempt to understand how things may have come to this. "The male logic has failed - now it is time for the female" it seems with the the tetralogy ending as Brünnhilde appears center stage holding hers and Siegfried´s small baby in her arms pointing towards a new beginning. All the others, obviously, are dead...

Stig Andersen continued his impressive performance of Siegfried - except for the premiere performance, where he was replaced by Christian Franz. This meant some changes to the production, since Siegfried at one point arrives on stage driving a car and Christian Franz does not have a drivers licence...
Tina Kiberg and Iréne Théorin alternated the Brünnhilde - two very different but interesting portraits - Kiberg´s being the more lyrical as opposed to Théorin´s larger and more dramatic voice who is to appear on the DVD. Peter Klaveness undoubtedly was intended as a very evil Hagen - and succeeded more so dramatically than vocally..Ylva Kihlberg literally shone as Gutrune. Guido Paevatalu also in a voice that didn´t quite match his acting skills while Anette Bod as Waltraute was convincing in both departments.

Last, but not least, the perhaps greatest achievement of this Cycle: The orchestra with Michael Schönwandt. After all I have heard Michael Schönwandt conduct 50+ Wagner performances over the past 20 years and I know that the heavy handed Wagner approach with plenty of brass and strings is just not his style, instead emphasizing the detailed structure and transparency of the score. But, even without the slightest hint of local-patriotism, I was hugely impressed with what was no doubt orchestra playing on a high international level -continuously flowing, never monotonous and even the major poignant sections such as Siegfried´s Funeral march and the Ending was pulled off magnificently.

The norns, here as members of a German Richard Wagner association, discuss Wagner performances in the prologue: 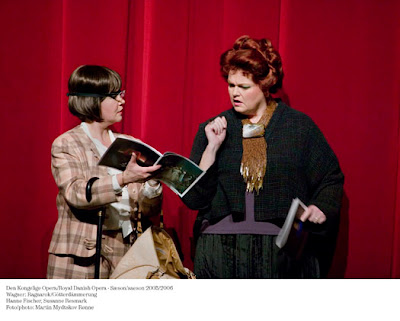 Siegfried and Brünnhilde when everything is still going well: 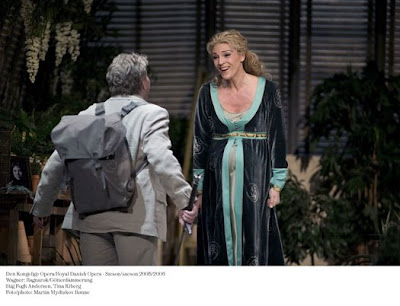 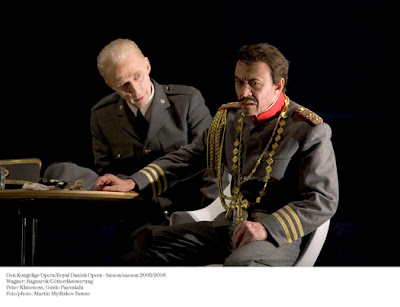 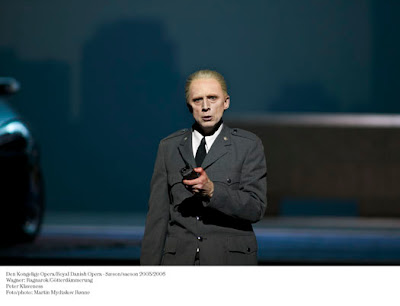 Gunther, Gutrune and Hagen (below): 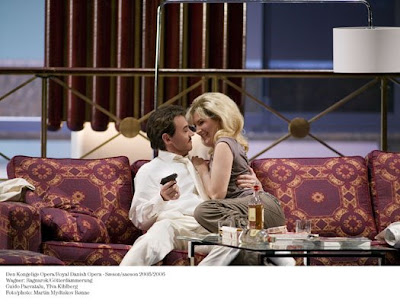 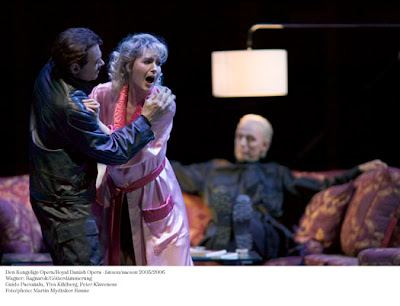 Waltraute trying to convince Brünnhilde to give up the Ring: 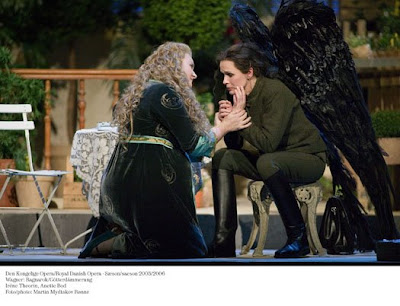 Alberich - the blackboard is full of the lessons he has tried to teach Hagen... 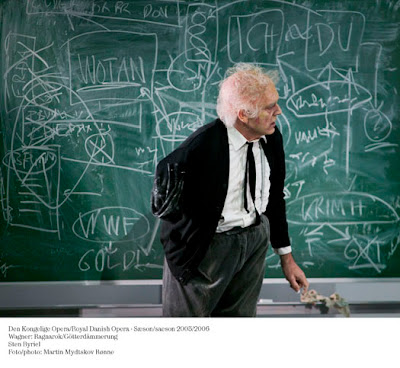 The happy and not-so-happy couple: 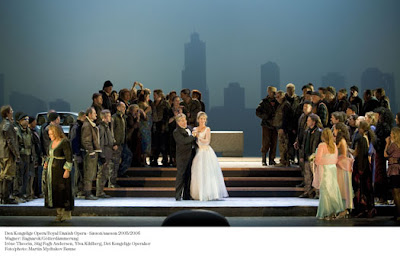 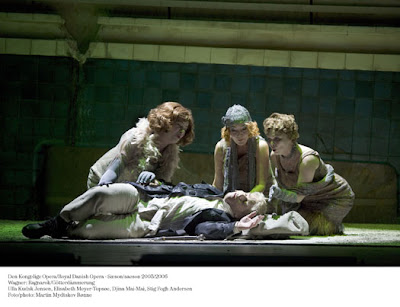 As Hagen and Gunther go out to kill Siegfried, we now realize that the entire Ring Cycle has been a flash-back of Brünnhilde´s mind, as she enters the attic of the family home and starts to unravel her family´s past in an attempt to understand her present situation and herself: 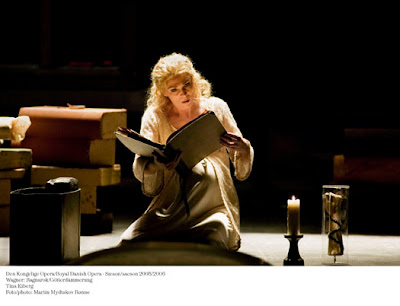 Siegfried remembering. With Gunther and Hagen: 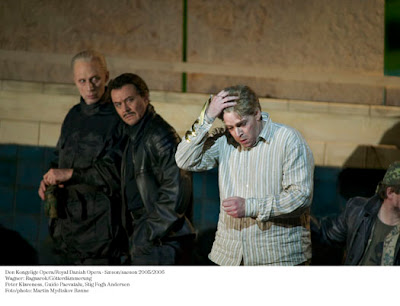 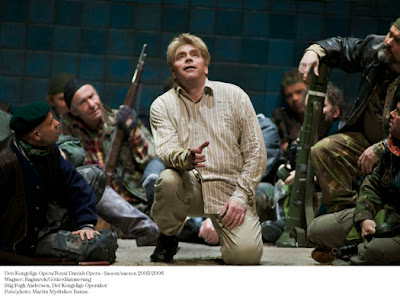 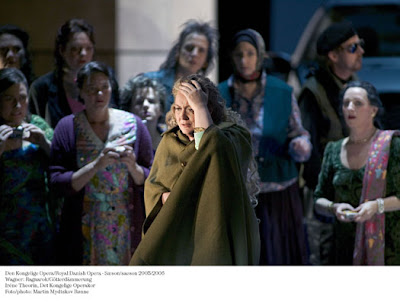 Brünnhilde reconciles with Gutrune. This is A Feminine Ring, after all: 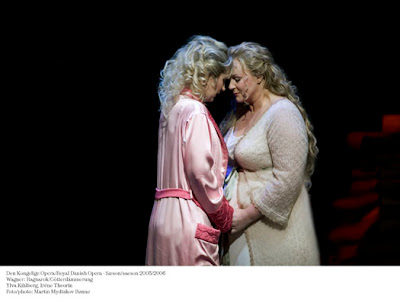 Brünnhilde sets the attick on fire: 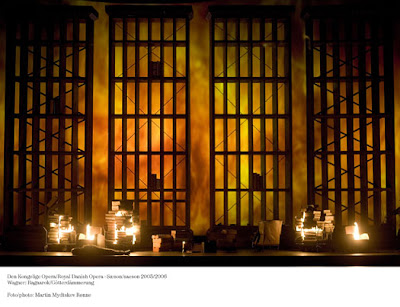 In the end, we see Brünnhilde, with hers and Siegfried´s child. The "male" logic and values have failed and it is now time for the female approach: 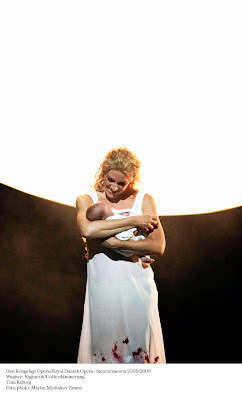 All photos from the Royal Danish Opera and the website of The Copenhagen Ring
Posted by mostly opera... at 18:30

WOW! This is the Ben-Hur of operatic blog-posts ever!!! Thank you so much for all the work and effort on this!

Wow, indeed! I've just finished breathlessly reading these brilliant notes on "The Copenhagen Ring" (I believe its US release is mid-August), and it's high time I expressed my thanks to you for each of your insightful, engaging posts. FWIW, while I've never been a particular fan of Waltraud Meier (OK, I've never seen her live, but her voice per se has never appealed to me audio-only), you have absolutely convinced me to do whatever I can to get to see her Sieglinde at The MET next season - even if I am so-o-o-o over that production. (The one I'll likely see is with Botha, BTW: admirable voice, but the oddest looking person I've ever seen on any stage, poor guy.) Anyway: many, many thanks for this superb and indispensable blog.

The Copenhagen Ring must have been a hard work indeed for Kasper Holten...

At least judging from his website, where the last update is more than one year old!

Or was he perhaps imprisoned, as A.C.Douglas proposes to treat such “vandalizing Regie-midgets”?

Parsifal, Mirto: Thank you very much! Waltraud Meier HAS to be seen live - audio only definitely does not do it..

Daland: Well, Kasper Bech Holten has had a rough time in the Danish media recently (not related to his professional work but rather to him being some sort of celebrity being followed closely by the Danish press) so perhaps he would not even have minded doing the prison time proposed by ACD! :)

That apart, in the last season he has directed new productions of Lohengrin in Moscow, Don Carlos in Copenhagen as well as Nozze di Figaro in Vienna and Copenhagen.

But agree on his website, which I refuse to link to unless it is updated!

I have only positive memories from this production, with one BIG exception: Peter Klaveness, to whom I find you too kind. To me, he represents one of the single worst casting decisions I have come across in recent times. His blustery acting did not convince me and there was no excuse for the vocal production he delivered. Of course I will order the DVDs but his presence is a significant annoyance. So, if Hagen is a key role to some of you listeners, be warned!!

Well, Hagen is an absolute key role to me, so...Perhaps I am being too kind, but he really did play the role well on stage and create this obsessive underdog different Hagen the producers wanted.
And this is what is behind my 4 rating. Vocally he´d be a 2 - maximum as he was well...not particularly strong. Really disappointing that Stephen Milling did not sing this. I am not sure why, as I believe he had sung it previously somewhere in the States (maybe that WAS why..)

Oh, how i want to see this. It looks like a very unique and lovable Ring.

I've heard Stig Andersen in Budapest, too, and, for my luck, the divine Christian Franz. That man is a genius.

"I've heard Stig Andersen in Budapest, too, and, for my luck, the divine Christian Franz. That man is a genius."
Really? Has he finally learnt how to act, then?!

I wonder if the director is an ASoIaF fan - Brünnhilde out of the fire with newborn baby? Very Daenerys.