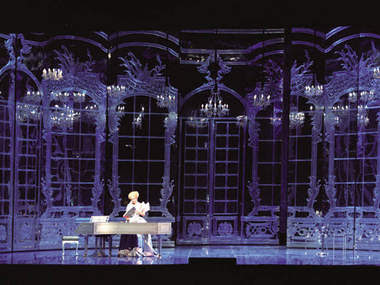 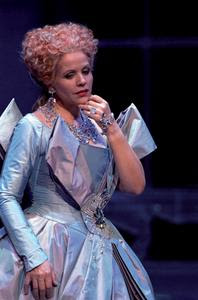 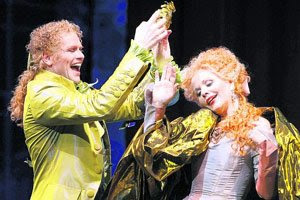 In brief: Marco Arturo Marello´s new Capriccio at the Vienna State Opera is a perfect synthesis of all the elements of an opera production, creating the exact kind of theater magic you hope for every time you go to the opera, but which you may experience only a handful of times throughout an entire operatic life..

The Vienna press has been overflowing with praise for this production as well as for Renée Fleming´s Countess with phrases like ”best new production at the Vienna State Opera since I do not remember when”, ”Renée Fleming is the Countess of Richard Strauss´ dreams” etc. For once, I completely agree.

Marco Arturo Marello clearly sees Capriccio as a conversational piece (as did Richard Strauss). The staging is exquisitely beautiful, opening and ending with the two combatants (poet and musician) set at tables at each side of the stage, gradually flashing back the action to an imaginary baroque setting with glitzy costumes having the Countess, Count and Clairon move around in between an interchanging background of mirrors and baroque paintings. With the final scene taking place in a beautiful mirror-covered bluish room with a piano (pictured above). Is it traditional? No, not really. First of all, it is edgy, but also light. But most importantly, it is never sentimental.

For me, Renée Fleming´s appeal has never been the beautiful voice as an isolated phenomenon, and sometimes (yesterday as well) I find her sound to be too covered, bordering on the nasal in her middle-upper register, an artistic choice I suppose, as she didn´t sound like this 8 years ago. But my fascination with Renée Fleming is based on the complete package she delivers: Her exquisite, poised and elegant stage appearance and (most importantly) just genuinely moving dramatic abilities, combined with exquisitely phrased singing and legato lines. And she more than lived up to the ridiculously high expectations surrounding her first appearances at the Vienna State Opera since 1995.

In short, Renée Fleming´s Countess was completely fascinating. First of all, she was in superb voice. And she once again showed really why she primarily is a Richard Strauss soprano – the exquisite phrasing, the legato lines.. and not least, the superbly varied acting: She was both funny, elegant and stylish, but here (with Bo Skovhus) also decadent and childish, showing more edge to her acting that I´ve previously experienced.

But what fascinated most was in fact the way she was singing: A completely different interpretation compared to her 2004 Paris Countess. Here in Vienna, her interpretation went fully along with Marello´s concept of Capriccio as a conversational piece and she emphasized the sprech-gesang element throughout the evening, at the expense of creating a creamy sound, but instead gaining considerable edge to the characterizaion, indeed conversing with the others on stage (and quite clearly being more sympathetic towards the composer as opposed to the poet).

That Renée Fleming did not insist on flashing the beautiful voice in a house where she had not performed in 13 years, in my opinion testifies to her commitment as a serious artist. In fact, I have never before heard Renée Fleming sing like this anywhere, sacrificing the optimal sound in order to gain in characterization. A positive surprise, indeed. Only in the second half of the closing monologue did she apply the full force behind the voice and create her usual sound.

In the magazine of the Vienna State Opera, she mentioned the 51 roles she had been singing, and her wish to concentrate on a few of those (Tatyana, Marschallin and Countess) rather than learning new ones for the future. But she DID mention a desire to sing Ariadne in the future, and also Elsa in Lohengrin, as the only two potential new roles.

But this was not only Renée Flemings night. It was a genuine team effort.

Bo Skovhus was absolutely hilarious as a hypomaniac, half-neurotic (fully intentional) Count. He emphasized the sprech-gesang element as well, and fluttered around the stage constantly engaging the others in the action whether singing or not, demonstrating a considerable comical talent. And while his chemistry with Angelika Kirchschlager was somehow lacking (intentional or not?), it was superb with Renée Fleming, the two of them moving around on stage like spoiled, decadent children.

For some reason, Marello made the Clairon of Angelika Kirchschlager (a very beautiful woman) quite masculine and un-sexy, mimicking one of Kirchschlagers usual pants roles, her shiny pants almost symbolically visible under the dress at almost all points and bossing around with everybody. All done in splendid voice, clearly demonstrating why she, in my opinion, is the best mezzo-soprano on stage today in her fach, with a lustrous, even and powerful voice throughout the entire range.

There was not one single weak or even half-weak link in the cast. All were as good actors as singers: Franz Hawlata, a fine singer-actor as long as he doesn´t venture too far out on the Wotan-Hans Sachs path, managed the tricky balance of being funny but not overly ridiculous as La Roche. Both Adrian Eröd and Michael Schade were fine as the two combatants, but given the choice, I´d go with the conductor..

First of all, Philippe Jordan looks like a movie star. Secondly (and in that order, mind…) he conducted a superb performance abandoning the light conversational approach so often applied to this piece, for a more pointed, edgy interpretation, completely matched by the happenings on stage. Again, without sentimentality. And the orchestra just played marvellously.

Intermission or no intermission? The Vienna State Opera didn´t seem to be able to decide: Half of the performances with, half without. Starting without. Ending (yesterday) with. Does the potential drinks sale revenue from an intermission not play a part here? Since the house was, of course, packed. But more surprising, there was not one single empty seat to be seen anywhere, and all standing room spaces was full as well…

This was one of the truly rare nights were everything – stage direction, set designs, singing, acting and music – just blended perfectly together to create something that I´ll have to name theater magic failing to find a better expression. The performance seemed to literally take only minutes. And it´s Capriccio. Mind you, I do not even like Capriccio..

If ever a production deserves to be recorded for DVD it is this one. This was the last performance of the run (with no cancellations by any of this stellar cast for the entire run), but it will be revived next season in September-October. A very good excuse to plan a trip to Vienna..

Photographs from www.staatsoper.at
Posted by mostly opera... at 14:30

With respect to Fleming I would only add that the somewhat covered sound you allude to is apparantely a choice but not an invariable one. This season it was much more pronounced in French songs with the Boston Symphony and the Capriccio than in Traviata and Otello at the Met.

Further, I enjoy here singing much when she doesn't luxuriate in the "beautiful voice", although I wouldn't describe myself as being offended when she does.

Great news respecting her future repertory. She may very well be worth hearing 10 years from now but certainly over the next 5 and it would be great if she were to do so in pieces that show her at her best. In a previous comment I agreed with your suggestion respcting Elsa and am thirlled she might do it. "Suitable" or not I'm sure she'll be most satisfying.

From my earlier missive you might guess that I agree with you completely about Kirchschlager vocally and further that she was not visually showcased to her best advantage. I've seen her mostly in trouser roles but earlier this year she held her own as Frittoli's Dorabella and, as they say in Torts res ipsa loquitor (that should be italicized - HTML issues). There are some qualifications here but I'll leave it ther for not.

I don't know if you got to see it but the Italians gave a masterful displacy of contanaccio (HTML, see above) yesterday. They've been "out of voice" all tournament, Toni in particular, and did well to keep a superior Spanish team scorless for 120 minutes.

Do NOT mention that disgraceful match. I am not over it yet. Who cares how the Italian team plays as long as they win?

And by the way I hate Spain (for obvious reasons for those with any knowledge of the history of the Danish national football team..).

I find your blogg to be very interesting, miss Mostly, but as a non-musician I sometimes have problems understanding what you are actually describing. Thus I make a rather silly request: Though this page is obviously not meant for singing lessons, I would be very grateful if you would take the trouble to enlighten me a bit: What exactly is a "covered" sound? (A term you use to describe the voice of R Flemming in this Capriccio-post).

Anonymous - thanks for commenting. I am not a professional myself either, though I have been doing quite a lot of amateur classical music playing and singing.
With covered, I simply mean she sounds like something covered under a roof. A sort of closed sound. Others will most likely describe it otherwise, if they agree with me at all.

Your explanation certainly gives me an idea of how it sounds - I think I have heard some examples of it in my career as an uninformed operalover... :-)
This cover-term has made me somewhat curious. As people use it to criticise a singer for "covering up" too much, I must say that I still wonder what a singer actually does with his/her voice when "covering up".

Anyway: I would simply have loved to hear and see this performance of Capriccio!