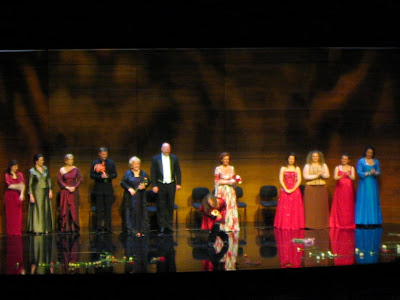 Scheduled as a concert performance, this was in fact a semi-staged performance: Three (or more) chairs placed on the stage in front of a brown screen. With the orchestra in the pit and the singers moving and acting as in a fully staged performance, the difference between this and a "modern" stage production may have been very small indeed..

The beautifully restored Liceu Opera House, of course was packed. The atmosphere was electric. None of the protagonists had cancelled. The performance was marvellous. The drinks were cheap. The auditorium was fantastic, being perhaps the most beautiful traditional opera house I have been in. What more can you ask for, except cheaper tickets?

Well, mainly a better conducted performance. Sebastian Weigle was actually booed by some at the end of the evening, and while I strongly disagree with this type of behaviour, I appreciate the underlying point: He was not good. This was in fact one of the most boringly conducted Wagner performances, I´ve heard in a theatre of this level. And a pity, really, since the quality of the orchestra seems to be rather high. And especially since his sleepwalking Wagner reading prevented the first act to be truly electric, despite fabulous performances from the singers. He was equally boring last year in the Bayreuth Meistersinger, which I then attributed to his unfamiliarity with the special covered pit...

This was in theory a complete performance of Die Walküre, but in reality the performance was built upon a dream-team Act 1, as I don't expect anyone payed the steep 150+ Euro ticket prices (my only real complaint about this performance apart from the conductor) to see Alan Held (who was in fact a very fine Wotan) or Evelyn Herlitzius´ lively Brünnhilde, once again demonstrating that huge sounds may be produced by slim singers. Otherwise Jane Henschel was a fine Fricka.

Now, to the point: Why does Plàcido Domingo keep singing Siegmund at 67+ years? The simple answer: I suppose, because nobody does it as well as he does...
If singing Siegmund was a competition on generating the loudest sound or displaying the freshest voice, he would perhaps be pressed by some his younger colleagues. But then there is the characterization, the vocal drama, the intensity. In fact, the only one beating Plàcido Domingo's Siegmund today, is his own Siegmund 15 years ago..
In this respect, it is incomprehensible that we do not have his Siegmund (preferably with Waltraud Meier's Sieglinde) on disc or DVD from his prime, but hopefully this will change..

I have now heard Plàcido Domingo as Siegmund four times within the last year, and he seemed in equally fine shape here in Barcelona as he was in London last autumn, with a Wälse cry (almost) effortlessly filling the auditorium and a thrilling dramatic intensity including superb chemistry with Waltraud Meier.

And again, no: Domingo's German diction is not bad. He has, in fact, excellent diction of a heavily accented German, of which I understood anything. How many times have I not heard native German tenors sing Siegmund and not being able to understand a word? Countless. Next to Renè Pape, who probably has the most perfect German diction seen on stage today, German speakers (as myself) probably cannot help occasionally noticing his somewhat strange German. But more as a curiosity than anything flawing his performance, in my opinion.

Should he stop singing the part, just because he was better 15 years ago? I don`t think so. If several significantly better singers were around, then maybe...

Plácido Domingo curiously only turned up at the second Third Act curtain call (thus missing the first), which I´ve been told was due to him having dinner outside the Theatre during Act 3 and simply not hearing the cell phone call for him to return!

Nevertheless, Plàcido Domingo was not the best singer of the evening. That was Renè Pape.

You don't need a beautiful voice to sing Hunding - most basses just yell their way (and quite effectively) through it. But it does help and it's refreshing for once, to hear all the words sung in full noble Wotan-type voice with complete command of the stage. But completely, 100% mean, he just cannot be with that beautiful voice...And, while he has the low notes well within his grasp, they are clearly outside his comfort zone. Which is just fine, since Renè Pape has really moved on from this part, and with his upcoming Wotan (about time!), I suspect his Metropolitan Opera performances of Hunding next season will be among his last ones, for the foreseeable future.

Had Richard Wagner been alive today, one of the singers that would have made him really happy (he would probably have tried to have an affair with her as well!) would have been the superb Waltraud Meier. In superb voice, completely unstrained, Sieglinde remains one of her most moving portraits. She has everything this part asks for: The vulnerability, the passion, the slight madness, the capability of going over the edge..And as always with Waltraud Meier, I know perfectly well what her vocal flaws are, I just don´t care about them..

And finally, to the really important issues:

Plàcido Domingo looked fine. Renè Pape looked great. Waltraud Meier looked..well, as much as I hate to say it: Disappointingly plain. She was wearing the same type flowery dress, as last year in the same team's Munich Walkure, and it just makes her look unsophisticated, which is the last thing she is, being one of the most beautiful and sophisticated women on stage today. Hopefully, she'll take the opportunity to change it before this summer's Walküre performances with Daniel Barenboim and the West-Eastern Divan Orchestra...

Other reviews in Spanish/Catalán from Barcelona-based bloggers GTL torn T and In fernem Land. 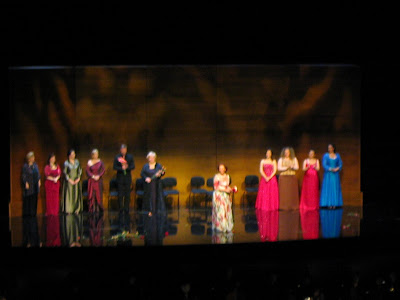 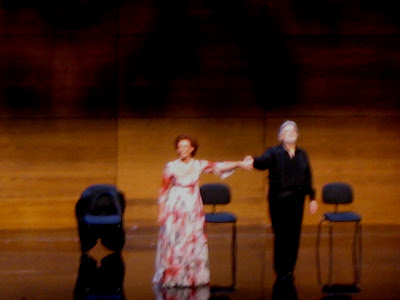 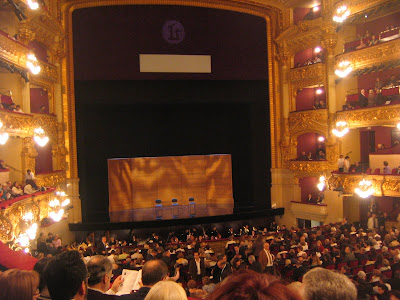 Thank you, I too believe that is the Liceu opera house, most beautiful in Europe, but as is the theatre of my city and my theatre, it seems to me that is like my son.
The second representation of this Walküre was much better than the first. The first act yesterday, was electrifying and exciting.
I'm glad you were able to explain in Barcelona on your fantastic blog.

Thank you for your kind words.

Yes, especially the restauration of the Liceu auditorium is so exquisitely done - with the dark ivory contrasting with the seats and the mix or old and modern in the paintings as well! And the mirror hall where you get drinks. It´s just restaurated in such a sophisticated way that I honestly don´t think I have seen anywhere else.. Really a fantastic house.

I´ll write a seperate post with pictures of the inside of the house.
And the drinks are half price of those in Berlin as well! And the white wine tastes better..

I am listening to the Act 1 recording from yesterday, and it was as I remembered it. Domingo really came off well, on radio as well!

By the way - Does anybody know who will be replacing Sebastian Weigle at the Liceu - I´ve read he is leaving for the Frankfurt opera, but haven´t been able to find any information on his successor? Assuming, that he is leaving?

First of all I have to say that it was really a pleasure to meet you and I have enjoyed very much our talk, walking down Ramblas and at the Café de la Ópera. I am glad you have enjoyed our Opera House, the Gran Teatro del Liceo. Adn what can I add about the performance? I was attending both of them. At the second one I was much close to the stage and I was able to see much better the faces and expressions of the singers. I think that this second performance was a little bit better that the first one.

Plácido was maybe taking some more risks than in the first performances, as for the case of the Waaaalse! Waaaalse!. Waltraud Meir and René Pape were completey outstanding on both occassions. How they could do it better? Their role debuts as Brünnhilde and Wotan, respectively, at the Scala di Milano in 2010 has to be an unmissable performance! Obviously all three of them were the big names of the performance.

I think that both Alan Held and Evelyn Herlitzius were a better Wotan and Brünnhilde in this second performance. Herlitzius shows problems at the higher notes and she was better at the third act. Well done for Fricka and the Walkyries. Weigle conducting was somehow better on the second performance but showing lack of energy at some parts.

All together, a wonderful and magic nigtt at the Liceo of Barcelona for a great performance!

The successor will Weigle, Michael Boder. That has already directed at the Liceu.
In the next season I should alternate Boder and Weigle.
Boder conducting Tiefland with Seiffert-Schnitzer-Titus and Salome with Stemme and Delavan
Weigle conducting Meistersinger (I hope better than in Bayreuth) with Dohmen-Skovus-Dean Smith-Gens and Fidelio with Mattila and Forbis.

This performance had a spectacular first act...

I'm glad you enjoyed "our" opera house and the white wine too...

I'm looking forward to your next visit, I hope we can meet then...

Better late than never - blink and week flashes by.

First of all it was a pleasure to meet you in Barcelona and have your company for a meal before the performance.

As for the performance generaly, I think you have fully covered that, however I would say that I thought the "staging" was superb. When it was described as a concert performance, I had hoped that there may be some form of semi-staging similar to that at the Proms with the ROH Walkure. However, this far surpassed that with the orchestra in the pit and a fully acted production, just lacking the detailed scenary, that can in some instances be such a distraction as opposed to adding to the proceedings.

Now being very picky - I thought it was an excellent touch to have Wotan tending the mortaly wounded Siegmund, but the timing did not quite work out as it ran into Wotan's despatch of Hunding - as I say being picky.

As an aside, there has been an interesting discussion elsewhere about the Act 3 contradiction where Brunhilde is fearing for the fate of Sieglinde at Wotan's hands, whereas Wotan show's no interest at all in pursuing Sieglinde. This gesture, no doubt by coincidence, seems reinforce the idea that Wotan did not have a vendetta against the Wolsungs.

Finally - what a voice Rene Pape has. This was the first time I have heard him live and his Fillip in Don Carlo (that we have discussed before) really must be something else live.

And of course Brunnhilde is spelt "nn" - dodgy proof reading that you only notice after posting!!!