The Konwitschny Don Carlos in Vienna 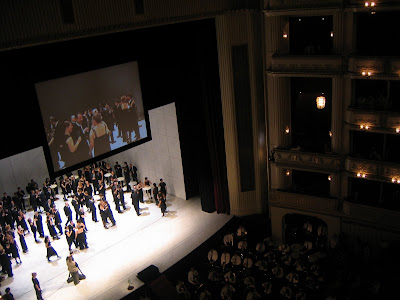 Peter Konwitschny´s controversial production of Don Carlos is described in detail in my previous post on the Vienna DVD of this production. And the main reason to see this live was my curiousity about two aspects of the production: The auto-da-fe and how it was managed logistically (as it is played out partly in the foyer of the Vienna State Opera) and the ballet sequence Eboli´s Dream - featuring Eboli´s wishful scenario of herself, pregnant with Carlos child, inviting Philippe and Elisabeth, the happy couple, for dinner while Posa ends up delivering pizzas...
Does the production make sense? In my opinion yes. And the auto-da-fe was spectacular (see below).

This version includes all the music Verdi ever wrote for Don Carlos and that is... a lot. And in the French version, so different from my favourite Italian of the day before, Don Carlos comes off rather as French Grand Opera. However, discussing preferences of the Italian vs. the French version is futile. Suffice to say: The complete Don Carlos is very long indeed...

All singers looked their parts and were rather good actors as well, so, for once, the drama as Verdi intended it, was believable. Starting with Nadia Krasteva, who looked absolutely stunning as Eboli. No wonder that Philippe has an affair with this woman. However, vocally she is more than slightly shaky, with a heavy vibrato ruining both middle register and top. But, looking like that she may not even have to build her career around her voice...
Iano Tamar has received excellent reviews for this Elisabeth - I am not entirely sure why: She looks just fine, although not too interesting, but vocally I find her characterless and with a rather dry voice.
Ramón Vargas is entirely believable as Don Carlos, though the part may be slightly too taxing for his comfort, and the love story of Carlos and Elisabeth (for once) is believable. Despite the fact that King Philippe, as usual I may say, easily is the best-looking as well as most interesting man on stage. Ain Anger is a superb actor, managing the switch from an almost Hunding-like cruelty in the first Act to his breakdown in the fourth. Furthermore, he looks quite dashing as well. Vocally, I am not sure, as he is quite young: Not with the René Pape-sort of beautiful voice by far, but nevertheless with quite some power and height. With a slightly more focused voice he could well move on to have a major career.
George Petean´s Rodrigo I remember very little about.

Bertrand de Billy seemed rather at ease with this grand French operatic style in a well-conducted performance.

And how was the infamous auto-da-fe managed?

Towards the end of the first intermission (right before the auto-da-fe) the arrival of King Philippe of Spain and Elisabeth within 20 minutes was announced via loudspeakers. Audiences were invited to watch the arrival of these celebreties from the foyer of the Vienna State Opera or from within the auditorium. Doors were kept open throughout the Auto-da-fe making it possible to watch the arrival of some of the dignitaries and subsequently watching the rest of the auto-da-fe from the inside of the auditorium. Right after the Auto-da-fe the second (and last) intermission of the evening took place. Highly entertaining. Illustrated below: 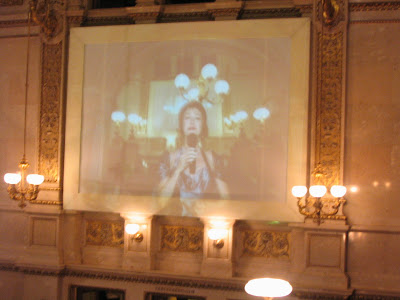 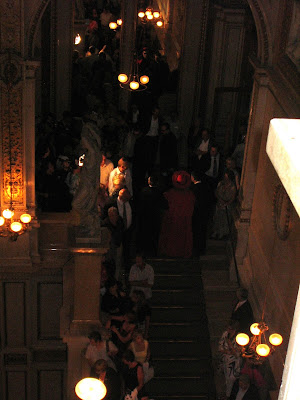 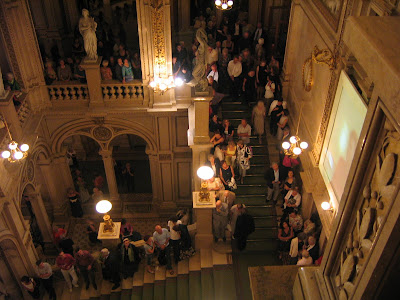 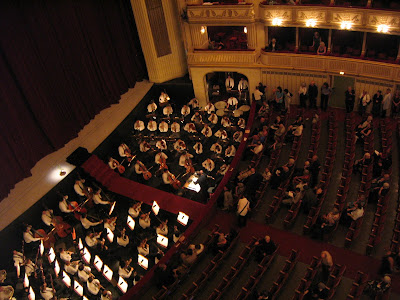