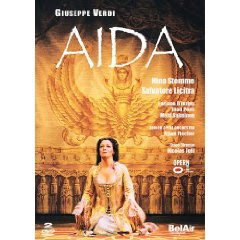 No question that Aida is a tremendously difficult opera to stage. On one hand there are the directors opting for recreation of the old Egyptian splendour, which almost invariably end out looking ridiculous or overstuffed. On the other hand, there are the directors updating Aida, which also more often than not fail, due to the very tight period-specific connection of the plot.

A recent staging in Berlin successfully updated Aida to take place in an 19th Century Egyptian museum around the time of its creation.

Also French director Nicolas Joël opts for setting this Zurich Aida around its time of creation in colonial Egypt to "attempt to give it back its true signification of bourgeouis and exotic drama" according to NJ from the accompanying booklet, who continues "bringing Verdi´s masterpiece closer to the historic beginning of this movement [imperialism of the Middle East] allows us to better understand this opera, but also, we hope, to give life to the characters that the composer´s genuis places far above comic books and photo stories".

Does it work? Not really, I have to say. Even the colonial sets seem overstuffed and old-fashioned. But neither does it ruin the piece entirely.

For those not bothered by Nina Stemmes vibrato, as I am, she will undoubtedly make a great Aida: Warm, engaged and with the required vocal heft.

Salvatore Licitra is passable as Radamés, but no more than that. Luciana d´Intino is a true Verdian spinto mezzo, and had she been a more compelling stage actress she would have been a really great Amneris. Juan Pons unfortunately he is way past his prime as Amonasro.

Undoubtedly, quite a few will be irritated by the split-screen images used throughout, without apparent reason, as the Zurich stage is small enough to be incorporated into a single frame.

It was good to have your commentary. I'm presently undertaking some research, believe it, on Radames!

What a role. I'm learning quite a few things about this Pietro Mongini, who created the role back in ... when was it?! Ah yep. Christmas Eve, Il Cairo, 1871!