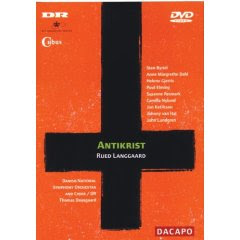 Danish composer Rued Langgaard (1893-1952) grew up in a strictly religious family, which influenced him throughout his life and career. Antikrist, an operatic oratorio, by many considered his key output, was completed in the final version in 1930, however not readily put on stage. Indeed, the first staged performance only took place in 1999. When Langgaard died in 1952, he was entirely unrecognized as a composer.

This first staged production of Antikrist in Denmark was played in the atmospheric old stables of the Christiansborg castle in the center of medieval Copenhagen. Thus, a seemingly perfect atmosphere for presenting this strange work: Not a conventional opera, but a prologue and 6 scenes depicting the influence of Antichrist on this world. This production is set within a society of fundamentally religious Christians. The claustrophobia, temptations and rigid moral codexes are excellently conveyed, each allocated a distinct scene.

The true revelation of this production. however, was the music: Entirely compelling, it has a definite fin-de-siécle atmosphere reminiscent of the late-romantic Schönberg, but most of all of Richard Strauss, who was loathed by Langgaard´s parents for his superficial compository style.

Beautiful, densely romantic playe by the Danish National Radio Symphony Orchestra conducted by Thomas Dausgaard I cannot see how this production may be bettered.
Furthermore, all soloists were fine, in what is genuinely an ensemble opera: 10 parts, almost equalling the number of scenes, no key roles - Sten Byriel, Camilla Nylund, Susanne Resmark, Helene Gjerris and Poul Elming all stood out.