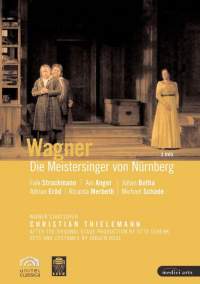 This is a so-called traditional production of Meistersinger, recorded live in 2008 at the Vienna State Opera, which for obscure reasons decided to revive Schenk´s 1975 staging of Wagner´s Meistersinger under the label "new production", referring to a socalled "musical reinterpretation" by German conductor Christian Thielemann. We already know Otto Schenk´s Meistersinger from the DVD from the Metropolitan Opera. This Vienna production is not quite as sumptuous, in fact it is rather austere and dusty at times, especially in the first act.

I remember well that in 2008 Thielemann was unanimously praised by the Austrian press for these performances, labelling them the best conducted Meistersinger in Vienna in decades and five hours of pure pleasure - referring mainly to the orchestral performance.  I am well acquainted with Thielemann´s mighty way with this score: Light, yet not too light, and with this inherent understanding of Wagnerian phrases, including in Thielemann´s case some very unconventional phrasing slowing the orchestra down at decisive points. Such as the much-debated major pause he always takes between "wach" and "auf" in the 3rd Act, It is still there. Egocentric or courageous? Probably both.

That Christian Thielemann favours traditional productions is no secret and not a problem as such. A traditional production may be as good, or better than a modern. That entirely depends on the individual characterization by the singers. However, too often, traditional sets are combined with a lack of personal direction + a not negligible amount of dust. Which is the case here.

It is understandable that Thielemann likes Johan Botha´s voice as it is both glorious and solid. But.. this is not a CD, and excuse me, the man is simply too heavy and cannot act his way out of a paper bag.
But Ricarda Merberth? Really she is quite disappointing as Eva: Matronly, wobbly and unexquisite, she is the stand-up-and-deliver type of singer. One shouldn´t think Eva would be that hard a part to cast?
She looks rather like the superb Ain Angers mother than his daughter. And with Michaela Selingers feisty Magdalena looking ten years younger and feistier than Eva. Michael Schade as well makes a rather mature, but however well sung David.
Falk Struckmann´s rather metallic voice with a certain lack of warmth may not be to everyones liking, however he is in better shape here than otherwise around that time.
Best is Adrian Eröd as Beckmesser: Funny as well as well sung and the scenes between Beckmesser and Sachs remain among the few infusing some life into this otherwise rather un-dead production.
However, we already know Otto Schens Meistersinger from the Metropolitan Opera released on DVD, with a vastly superior cast. Christian Thielemann´s Meistersinger is worth preserving Otto Schenk´s Vienna State Opera production with the current cast really is not.

He must be both!

Only an egocentric can “invent” pauses that Wagner didn’t write on the staves.

And only a courageous can decide to play them before the most prepared audiences in the world!

(the effect may be fascinating, but then one start asking questions like: why didn’t Wagner-the-genius think about it himself?)

Don´t know what it is about Thielemann - there is something very self-absorbed in his conducting as well (or at least it appears so). I am probably unfair to call him egocentric - a touch of that undoubtedly goes with the profession.
But then - a deliberate break of several seconds in the "wach auf" (I mean, this is not just ANY chorus but THE chorus)- and it´s not the only place he does it. The way he slows down these tempi in Meistersinger is just completely breathtaking. Now, wheter he takes greater liberties with these scores (I´ve particularly noticed his shifts of tempi in Meistersinger and the Ring, while Tristan and Parsifal, in that respect seem more "conventional") than other conductors whom I find of very high quality in this repertoire(ie. Barenboim, Furtwängler or Solti) I don´t know. By the way, I wish Abbado would conduct a complete Ring cycle...

We know that Wagner was almost never satisfied with the “tempi” taken by his contemporary conductors in playing his dramas: this might lead to thinking that he himself wasn’t perfectly comfortable with his own indications on the score. And this in turn might imply that any conductor is then free of “interpreting” Wagner’s scores at his will...

Then it also depends on the “philosophical” matter hidden under a score: the MS’s “Wacht auf!” is a tribute to Sachs (as almost literally copies Sachs’ “urtext” from his 1523 "Die Wittenbergisch Nachtigall"). The written text of it goes “Erwacht!“, which would hardly allow for a long pause to be made between “Er“ and “wacht“... so we may infer that Wagner, having opted for the urtext, would himself like a very long “in-breathing“ between “Wacht“ and “auf“, so... bravo Christian!

Different case is the closing of Götterdämmerung, and how to play the transition from the “twilight” theme to the last seven bars (the “redemption” theme): in the score there’s absolutely no “pause” sign, simply no “legato” bows crossing the bars... Now, if you make a semiquaver pause, like Thielemann did also in Bayreuth 2007, you imply that a completely new world is being born after the destruction of the old one. Is this what Wagner wanted to tell us? Hardly... if you consider that the four bars of last appearance of the “redemption” theme are filled with almost all reminiscences of the old world: Alberich, ring, Rheintöchter, Siegfried, woe, Walhall... and that the human beings left to start over the “new order” are... Alberich and the Rheintöchter!