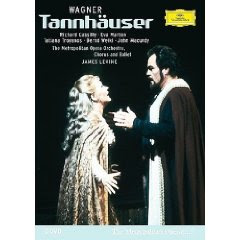 This Metropolitan opera 1982 production of Tannhäuser is, for once, rather easily described: It is quite simply traditional from A to Z, aiming at realistically and meticulously depicting the story of Tannhäuser exactly as stated in the libretto. The team of Otto Schenk and Gunther Schneider-Siemssen, responsible for staging virtually all of Wagner operas at the Metropolitan Opera do what they are reknowned of doing: A Tannhäuser I would not have been surprised to see 100 years previously in Bayreuth.

Detractors will call this an opera museum, admirers will call it a staging faithfully to the intentions of the composers. Your choice. However, regardless of tastes, I suspect most will agree that the setting of the third act is simply stunning.

Of the singers Tatiana Troyanos lush Venus (she looks great as well) and Bernd Weikls beautifully sung Wolfram stand out.
Eva Marton is heard in her rather short prime as an Elisabeth with refreshingly punch, though she has always been a stand-up-and-sing performer. Richard Cassilly is disappointing as a stiff and vocally strained Tannhäuser, though as most will know it is a virtually impossible part to sing.

Engaged and brisk performance from James Levine and the orchestra.

Wagner does not get more traditional than this.

Arrival of the guests in Wartburg:
The bottom line: