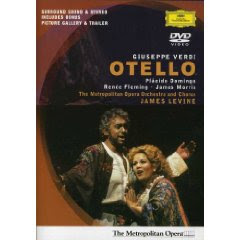 Moshinsky´s Metropolitan Opera production of Otello is a rather traditional affair, not overly spectacular, however not excessively overstuffed. In short a production fitting for a standard "bread and butter" opera, where the cast is bound to change continuously for years to come. Though I do not think a better cast has been assembled for this Otello, than the present one.

Renée Fleming has stated that Desdemona fits her voice so well, that it in fact could be written for her. And she is indeed extremely well-suited to this part with her blooming, creamy voice, here in her absolute prime. I have never seen a better performance from her than this. Furthermore, she has superb stage chemistry with Plácido Domingo, who appears (as of now) on three Otello DVDs: The 2001 Scala production with Barbara Frittoli and Riccardo Muti and the 1992 Covent Garden production with Kiri Te Kanawa and Georg Solti.

Something may be said for each of those versions. Focusing solely on Plácido Domingo, I´d say that he is in better voice than in 2001 and has more poignancy to the interpretation as well as infinitely more chemistry with the Desdemona here than at Covent Garden. So often has it been stated the Plácido Domingo is Otello, that it seems rather redundant to repeat.

Of James Morris´ Iago I am slightly uncertain as of what to say. He can sing the part and he is sly and cunning, but somehow he doesn´t really seem vocally at ease.

Many may prefer this as their favourite Otello DVD. Personally I may narrowly prefer the Scala version due to the slightly more inventive staging. Again, among the Domingo versions some may chose the Covent Garden Otello, though the lack of interaction between Domingo and Te Kanawa is a major liability in my book.