For those not allowed to live 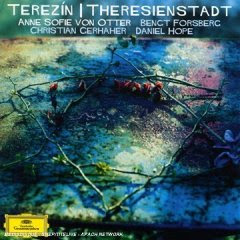 Ilse Weber (1903-1944) was primarily a poet, writer of children's books, and producer of programs for the Czech Radio in Prague. Weber and her husband saved the life of their oldest son when they sent him to Sweden on a Kindertransport prior to their own deportation to the Terezín (Theresienstadt) concentration camp in 1942.
At Terezín, Weber worked as a nurse in charge of the children's ward where she often accompanied herself on a guitar while singing for the children. When her husband was summoned for to Auschwitz in the fall of 1944, she volunteered to accompany him together with her young son Tommy. Her wish not to break up the family resulted in the execution of Ilse and her son in the gas chambers of Auschwitz, while her husband survived her by some thirty years. Wiegala, one of her works, a simple lullaby is rumoured to have been sung by her when she accompanied the children into the gas chamber. More here.
Wiegala and other works by composers imprisoned at Theresienstadt (and all but one executed in Auschwitz) may now be heard on the incredibly moving CD Terezín/Theresienstadt by Anne-Sofie von Otter together with Forsberg, Gerhaher and Hope. Recordings like this do not appear every year. More on the disc here.
Posted by mostly opera... at 23:39