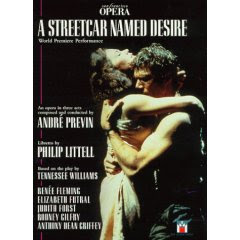 André Previns´s opera A streetcar named desire was given a near-optimal performance in this 1998 world premiere production from the San Franciso Opera.

As expected, the quality of the Previn´s score has been widely discussed, and in short, I very much enjoyed it. Together with librettst Littell, Previn succeeds in capturing the undercurrents and lingering tensions of Tennesse Williams drama. Indeed, the opera comes across rather like spoken recitatives supporting Tennessee Williams´ drama than as an individually composed piece, and I suspect it would be considerably less interesting without the visual element. However, with protagonists as these, it is quite a moving experience.

Rodney Gilfry was genuinely scary as Stanley, with that touch of unpredictability makin one sit on the edge of the chair. Renée Fleming was just wonderful as the worn, but still attractive Blanche, here in her undisputed prime, bringing her overearthly beautiful voice to maximal expressive use with entirely straight-forward and natural singing. Accompanied by a very convincing Elizabeth Futral as Stanley´s subservient wife and Blanche´s ever-sweet sister, Stella.