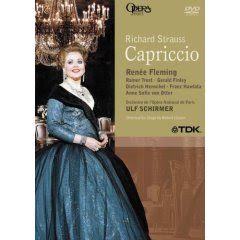 Whether one actually likes Capriccio or not, I find it hard to argue against this close to ideal production by Robert Carsen set in the elegant Palais Garnier in Paris 2004.

A theater within the theater production transferring the action to the time of the composing of the opera (1941), though the Nazi presence is very small in this very elegant look into upper-class Parisian lives at the time. Perfectly suited for DVD, the action is played out at parts before an empty auditorium with the Countess and her brother as spectators from the balcony. At other points it seems a genuine live performance.

Everything in this production just oozes elegance: Carsens staging is accompanied by the equally elegant and sophisticated conducting from Ulf Schirmer.

And the singers are simply first-rate over the entire line: First of all, obviously, Renée Fleming as an entirely convincing Countess. Whatever one may feel about Renée Flemings vocal technique, including her heavy use of portamento, her Countess is both vocally and dramatically entirely convincing and is on par with the greatest in the discography.
Virtually all the others stand out as well, beginning with Anne-Sofie von Otter as a slightly mad Clairon, Franz Hawlata as a not overly ridiculous La Roche, Gerald Finley as a half-desperate Olivier, Rainer Trost as Flamand and Dietrich Henschel as a rather confused Count.

One of the finest DVDs on the market, though traditionalists may prefer the only alternative on DVD, from the San Francisco opera with Kiri Te Kanawa and conducted by Donald Runnicles, in a completely traditional staging (read: including plenty of dust). While this musically is not a bad choice, I find Renée Fleming clearly superior to Te Kanawa as well as von Otter to Troyanos.
Renée Fleming in the Final Scene:
The bottom line (scale of 1-5, 3=average):