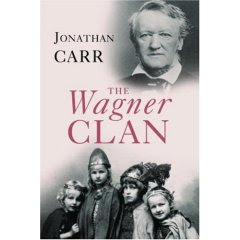 Highly recommended: Jonathan Carr´s book The Wagner Clan (more here) telling the story of Richard Wagner´s descendants and the (eternal?) struggle for power in the family (read: Struggle for control of the Bayreuth Festival). Very entertaining reading with essential background information for those interested in Wagner related happenings.
Although, it´s always difficult to say with certainty without having access to the original sources, the writing appears to be both honest and objective.

Only at one small point does the author seem a bit unfair: He brings forward some private gossip about Katharina Wagner (which I do not intend to repeat) and does seem to favour Nike Wagner and her proposals for the Bayreuth Festival. He is, of course, entitled to his opinion, but I cannot help feeling that the last chapter in the book (which covers the last 10 years) may be lacking in objectivity with regards to present day family members. On the other hand, his coverage of the elder generations, which takes up 95% of the book, including Houston Stewart Chamberlain, Friedelind, Cosima,Wieland and Wolfgang Wagner etc. is excellent and appears to be very balanced. And with an unsentimal view of the Bayreuth Festival and the future. Even for those not particularly interested in Richard Wagner´s works, this is a fascinating tale of power, history and politics.

And one of the few books related to Richard Wagner, that I have actually read in full myself, since my main interest has always been the music by and not the person of Richard Wagner. For the last 10 years I have had ambitions of reading Cosima´s (Richard Wagner´s wife) diaries, but they are still unopened on my shelf (as James Joyce´s Ulysses by the way...).
Posted by mostly opera... at 21:07