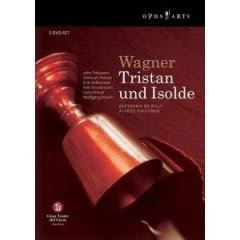 Tristan and Isolde. Liceu, Barcelona 2002. Production: Kirchner. Cast: Deborah Polaski (Isolde), John Treleaven (Tristan), Eric Halfvarson (Marke), Lioba Braun (Brangäne), Falk Struckmann (Kurwenal). Conductor: Bertrand de Billy.Detailed information here.
Ironically, director Alfred Kirchner states in the accompanying leaflet that "the main strength of the drama derives basically from the people on stage. Drama is, and will remain, the experience of human behaviour". Well said, but apparently easier said than done: The overwhelming weakness of this Tristan production, in my opinion, is exactly the lack of drama between the protagonists.

The sets are simple: The grey interior of a ship with a quadrangular view of the sea, where a Loch Ness-like monster curiously appears during the Love Potion scene in Act 1; a disintegrated room (symbolizing the lovers state of mind?) in act 2; and a similarly bare room with concrete walls in Act 3. Kirchner tells the story relatively straight forward as stated in the libretto, with a couple of minor exceptions, most notably that both Tristan and Kurwenal kill themselves and the opera ends with Isolde gazing out into the black night.

The problem here, as well as in his recently released Götterdämmerung from Bayreuth is that there are no apparent interactions between the protagonists. Admittedly, neither Deborah Polaski nor John Treleaven are the most engaging of stage personalities, and particularly Polaski seem rather dry-voiced and unengaged. Treleaven visibly makes an effort, it just doesn´t amount to much. Lioba Braun infuses some life into the production with her both well sung and well acted Brangäne, but unfortunately the Tristan-Isolde relationship has to work on some level to make this opera work as a whole. Eric Halfvarson is dramatically convincing, but vocally unconvincing as Marke, which also applies to Falk Struckmann, not caught in his best voice. But then, Falk Struckmann´s voice has always been significantly better in the theater than on record, which unfortunately does not help the potential buyers of this DVD. Bertrand de Billy furthermore conducts a respectable, though not spectacular performance.

Whether inclined towards traditional or non-traditional performances of Tristan and Isolde there are several other DVDs on the market, which I´d recommend before this one, most notably the 2007 Chéreau/Barenboim production and the Barenboim/Müller production from Bayreuth 1995. For the more traditionally inclined, the Barenboim-Ponnelle 1982 Bayreuth production is very beautiful and with superb conducting and singing as well. The 2007 Glyndebourne Lehnhoff production may be worth taking a look at, with fine performances, though in a static production.
Promotional video:
The bottom line (scale of 1-5, 3=average):