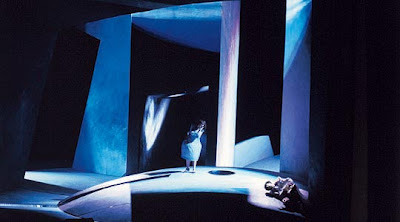 This was indeed Sir Simon Rattle´s evening. It just took a couple of seconds of the prelude to realize, that his take on this score is exceptional: The unending flow and the myriad of details of melted into orchestral playing that I simply cannot imagine being bettered. He literally made the interludes the highlights of the performance.

And my expectations were not even that high: Based on my previous knowledge of Simon Rattle, I´ve always found him a somewhat disengaging/uninteresting conductor, but with an interesting choice of repertoire.But in Pélleas, his enthusiasm lifted the entire auditorium and he, deservedly, received massive applause. The orchestra literally shone, in what was in fact Sir Simon Rattle´s debut at the Berlin State Opera, apparently switching podium for the evening with Daniel Barenboim, who simultaneously conducted the Berlin Philharmonics over at the Berlin Philharmonie.

Now why does it just not sound like this when Sir Simon Rattle conducts the Berlin Philharmonics? Seriously, if it did, I don´t think any German music critic would question his leadership of that orchestra (as they do more than occasionally, as it is).

The production is the old Ruth Berghaus staging from 1991 - very abstract and simple in the outlook, with basically one single set, as pictured above. Undoubtedly, Hanno Müller-Brachmann was the most convincing of the singers, with a beautiful rendition of Golaud´s part.
Magdalena Kozená has an exceptionally beautiful and even voice - she is just not a very convincing actress, to put it mildly Changing at random between her two (maximum three) facial expressions throughout. A semi-dramatic moment arrived, when the highly pregnant (with Sir Simon Rattle by the way) Kozená rolled down the hill at the right side of the stage, but luckily it seemed intentional. But, admittedly, she is not helped by Mélisande´s heavy bubbly costumes and the fact that she, in her heavily pregnant state, continuously has to walk up and down a small hill on stage. She would have been more than justified to cancel, but luckily for us, she didn´t and, in my opinion, deserves major credit for going through with this engagement.

I thought William Burden (not previously known to me) a rather anonymous Pélleas, while Robert Lloyd, with his strange nasal sound, was dramatically convincing, as always, as Arkel. Perhaps the most touching scene of the evening: The boy soprano (from the Tölzer Boy Chorus) singing the role of Yniold.

Now on my wish-list: To hear Sir Simon Rattle conduct more opera. And in places more accessible than the Salzburg Easter Festival or Aix-en-Provence Festival (where he is currently in the middle of Ring Cycles). 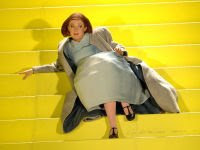 The pregnant Magdalena Kozená as Mélisande
Posted by mostly opera... at 12:46

I was lucky enough to see and hear the last night on Wednesday. Ms Kozena rolled down the hill as planned but unfortunately also slipped and fell on her rump unintentionally towards the end. She hardly skipped a note and Sir Simon seemed unperturbed. It was a superb performance musically, though the set(s) suffer from a gloomy sameness.

Yes, agree completely on the sets. It strikes me as strange that Ruth Berghaus was so controversial and keeps getting referred to as a communist.

With that in mind, I expected some sort of political manifest in her staging, but apparently that didn´t interest her at all when directing opera. Just saw her Freischütz on DVD from Zurich and it was the same thing again: Gloomy and geometrical. Maybe boring, but hardly shocking (at least for todays audiences).