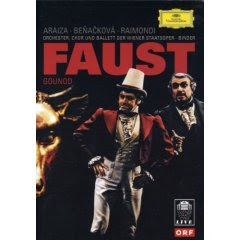 This is British film director Ken Russell´s staging of Faust from the Vienna State Opera dated 1985. Apparently, the production was judged controversial at the time, despite it being in essence a traditional staging in both conception and presentation. The controversy mainly related to Russell´s departure from the libretto on the following main points: Making Marguerite a nun, and focusing on her punishment (showing a guillotine at the end of the opera) instead of her redemption.

The sets are largely realistic, opening with the old Faust in his study, receiving the dead body of a young woman, whom he unsuccessfully tries to revive. Towards the end of the opera, Faust is back in the study, this time in front of Marguerite´s casket. Mephistopheles appears in a puff of smoke, and apart from parts of the action revolving around nuns and priests, the story is told pretty straight-forward.

Though I am undecided on the idea of Marguerite as a nun (does this really add realism to the Faust-Marguerite love story, as Ken Russell claims in the booklet notes? - I would tend to say no), Ken Russell´s symbolism, in my opinion, adds spice to the story, and it is entertaining viewing indeed, despite the occasional dark sets. Not too surprisingly, the production has a distinct filmic quality, which suits the work well.

Unfortunately, the Walpurgis night scene is excluded as it has some of my favourite music (as was also the case in the recent MET production).

The singers range from fine to excellent, with the deservedly biggest applause to Ruggero Raimondi as Mephistopheles: He is in superb voice as well as elegant and funny.

Also fine performances from Francisco Araiza and Gabriela Benackova. The State Opera orchestra is conducted by Erich Binder in a fine performance, though a bit more intensity wouldn´t do any harm to the work.

This production was replaced by a new production by Joël autumn 2008 at the Vienna State Opera.

While waiting for the ideal Faust to appear on DVD, this one may not be a bad option.

Marguerite as a nun may seem useless, but if you take into account the deep religious faith of Gounod, it then becomes pretty related to the composer (and to this piece itself, I think).

The guillotine scene is indeed visually pretty intense but the rest of the set did not strike me as anything but boring and unimaginative.

I suppose that makes sense. I have recently become quite fascinated with this opera and really look forward to an exciting DVD production. Hopefully the new Joel production in Orange/Vienna State Opera (which I suspect will be recorded in one way or another) will fit the bill..

Even if the Orange performances don't end up being released on DVD, one of them (August 5) will be broadcast live on French television (France 2) which means it should emerge on Operashare.

By the way, on the site of France 2, they give a tiny indication about the staging: "le spectacle se jouera devant un buffet d'orgue installé à flanc de mur".

Do you see the recurring religious theme there? Really, Gounod can't be understood without that aspect.

The perfect DVD may yet not exist, but do you know the magnificent CD version from 1959 released by EMI (Cluytens, Gedda, De Los Angeles, Christoff, Blanc, Berton, Gorr, Autran)?
It's really worth listening...

But anyway, it's not too late to attend Faust in Orange!

Don´t even mention that Orange thing :) I would love to go. And on top there is the casting of Mephisthopheles as you know well....
And thanks for the CD recommendation, will definitely check that one out.