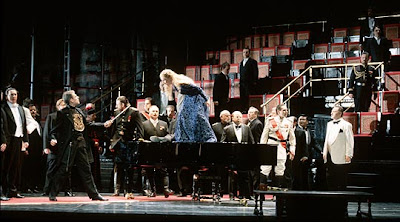 Robert Dean Smith (last seen in movie theaters as Tristan in the MET HD transmission) made his debut as Tannhäuser in this Berlin State Opera revival of Harry Kupfers 1999 Tannhäuser staging. And, no doubt he is a fine Tannhäuser. And with curly hair he looked vastly better than in the Tristan live transmissions from the MET. His voice is warm, but not large, which is however not a major problem in the relatively small house of the Berlin State Opera. But even here, he seemed occasionally exhausted. He has, however, fine and clear diction, a necessity in a house where Wagner performances are never texted. As the only non-German singer in the main cast, Dean Smith was in fact the singer I could understand the best. A fine performance from him, however I doubt it would be advisable for him to try this role out in a much larger house.
Michaela Schuster is apparently set to take over Waltraud Meier´s repertoire in the major German houses – Kundry in Berlin last year, Venus this year and Ortrud next year in the new Lohengrin production. And while she does inhabit her character on stage and her voice cuts through the orchestra, she seems rather shrill with a unpleasant vibrato particularly in the high register. Anne Schwanewilms is a more mature and independent Elisabeth as usual seen, but while she convinces dramatically, I continue to hear a dryness in her voice which has never really taken to me. In fairness, she received major applause, and my neighbor asked repeatedly to borrow my binoculars several times to look at her…Roman Trekel seemed quite simply to have an off night.
Christoph Fischesser has the dubious honor to be a Wagnerian bass in René Pape´s house, meaning he is largely scheduled to sing René Pape´s roles when the latter is not available. Such as Hermann in this production and (even worse comparison-wise) King Marke in May. Fischesser is actually a quite good singer (as well as being the best-looking of the cast by far) who in fact does not deserve to be endlessly compared to Pape. Though quite young he is authoritative on stage and with a quite flexible voice as well.
Philippe Jordan´s reading of the score seems to be more focused on precision and rhythm (particularly in the string section) as opposed to Barenboim´s more fluid approach usually heard here (as most readers will know this is Daniel Barenboim´s house). But it seemed a well-thought reading and the orchestra sounded fine.
The sets are simple and aesthetic, based around a petrified piano (in the Venusberg scene), a normal piano recital with an audience (the singing contest) and a bare stage (Act 3), everything updated to around present days. The time zone change apart, Kupfer seemed to adhere quite closely to Wagner´s libretto (ie. the characters, which Wagner intended to die, do indeed die here).
Though a good performance, it was not, by any means an exceptional one. In truth, I find it difficult to be overwhelmed by Tannhäuser – I´ve always found the opera to be one of the lesser of Wagner´s works, both dramatically and melodically, despite some magnificent orchestral and chorus passages. Nevertheless the massive applause (including several curtain calls after each act) somewhat surprised me. But much preferred to the obnoxious booing practice (of which there was none today).
Posted by mostly opera... at 14:35

Thanks for pointing that out. I suppose I just assumed that Wagner performances were always run without subtitles at the Staatsoper Under den Linden, since I have attended quite a few Wagner performances there in the past years and they were never texted - i.e. Meistersinger, Tannhäuser, Parsifal and The Flying Dutchman. But I haven´t seen the Tristan yet (but I will in May).

I saw this performance and it was thrilling! Especially the second act was marvellous. I had problems with the voice of Anne Schwanewilms. She disappointed me a bit, especially in the beginning but got better later on. Being a friend of Philippe Jordan I met him afterwards for supper and he was very happy with the performance. We can expect incredible performances of Wagner in the future and I'm looking forward to his Ring in Geneva next year!
Guus