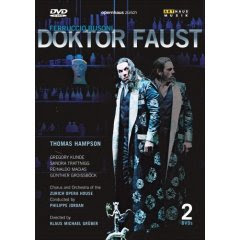 Doktor Faust was unfinished at the time of Busoni´s death in 1924 and the version used in this recording is the one completed by his pupil Jarnach presented at the world premiere in 1925. The work has been slowly gaining recognition and has long been regarded a cult opera, along the lines of Palestrina and Cardillac. Only in the 2000´s was Doktor Faust performed at the Metropolitan Opera and this season it may be seen at the Berlin State Opera.

Busoni worked on Doktor Faust for more than twenty years, and deliberately aimed at distancing himself from Goethe´s version. In Busoni´s version, Faust is a university professor, despairing of live, looking for a higher meaning. Three students present Faust with a magic book. He then conjures up several serving spirits and amongst them chooses Mephistopheles. In exchange for his post-mortem services, Mephistopheles gets rid of Faust´s creditors as well as Gretchen´s (whom he seduced before this opera starts) brother.

All this may be seen as a prelude to the real story of Busoni´s Doktor Faust, which in essence starts when Faust turns up at the wedding of the Duke and Duchess and by conjuring up images from the Old Testament (such as Samson and Dalilah, Salome and Jochanaan) seduces the Duchess and eventually leaves her. A year later he receives notion of her death and Mephistopheles presents him with her (and Fausts) dead child, turns it into straw - sets fire to it - and Helen of Troy appears from the ashes. Faust now acknowledges the meaninglessness of everything he has strived for. But too late. The students reappear and claim the book, while predicting Faust´s death that same evening. At night a beggar appears with a child - Faust recognizes her as the Duchess. Faust accepts the child and his spirit is transferred to the child before he dies.

Klaus Michael Grüber´s staging is both simplistic and aesthetic, underlining the static quality of the work as well as smoothing the transitions between the various scenes. The protagonists often wear extravagant costumes, contrasting with the austere background.

The cornerstones of this performance are Thomas Hampson as well as conductor Philippe Jordan. Many ideas are presented in this work, and Faust´s character is vastly complex, but the complexity seem to be grasped by Thomas Hampson, in one of the finest performances of his entire career. Vocally secure, dramatically convincing. Easily the best performance I have seen (of many) by him.

In a bonus interview Thomas Hampson, who also performed the role at the MET some years ago, furthermore discusses the work in detail calling it a masterpiece in impressively good German.

To my knowledge this is the only DVD version of Doktor Faust.