The Konwitschny class-room Lohengrin on DVD: Higly recommended for those who do not like Wagner.... 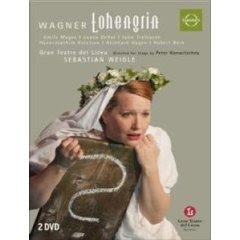 On several occasions I have successfully recommended this DVD to acquaintances, otherwise not appreciative of Richard Wagner´s work. They typically respond with "so much went on at stage, that we did not have time to get bored". Which is the exact reason for my general disapproval of this production: So much goes on on the stage, that I lose all perspective of the music. How can you concentrate on the music when Ortrud throws pieces chalk in Telramunds face in the back of a classroom? I have tried. Several times, in fact, having seens this production in the theater in both Hamburg and at the Royal Danish Opera, as well as on this DVD from the Teatro Liceu, Barcelona recorded in 2006.

According to Peter Konwitschny the concept of this production is the result of a thorough analysis of both libretto and music. In his opinion, the characters interact much like children, making it a logic step to stage this Lohengrin in a classroom.

Opens Act 1: We are in a class-room. King Heinrich is the teacher, Elsa is the model-pupil, Ortrud and Telramund throw chalk around in classroom. They tease Elsa, who hides in a closet. Lohengrin then arrives and they fight with wooden swords. But Lohengrin, in essence, is a grown man, and when he kills Telramund in the third act with a real sword, the children's world fall apart and they are suddenly forced to grow up - their confusion and insecurities laid bare on the open stage.

It is a well thought out concept indeed. And Konwitschny convincingly communicates his message to the audience, and I even got it the first time, which is far from always the case. Indeed, I am not averse to such experiments with Wagner. Nevertheless, I must admit to not liking this production, the main reason being that all the action on stage completely move the focus from the music to the theater. This staging tells a story in itself. I am not sure it is Lohengrin´s, but that is less important. What is more important is, that Wagner´s music does not seem to fit in here, or even be an important element in telling this story. Which probably explains this productions success with audiences otherwise not drawn to Richard Wagner´s works. But I´ll have to admit to knowing several people with great love for Richard Wagner´s works who also love this production.

Unfortunately, Lohengrin is not particularly well represented on DVD. I personally prefer the Lehnhoff/Nagano Baden-Baden staging. But I may not be representative of most potential Lohengrin DVD buyers, since my interest in Lohengrin primarily lies with the Ortrud-Telramund scenes, where Waltraud Meier/Tom Fox are unbeatable in the Lehnhoff production.

For the more traditionally inclined, the Vienna production conducted by Claudio Abbado with Plácido Domingo and Cheryl Studer as Lohengrin and Elsa is musically superb, although the medieval staging is dark and sinister.

You will be delighted in learning that, at last, DGG has issued the Werner Herzog/Bayreuth LOHENGRIN on DVD:

Thank you - I´ll definitely check it out, though, based on what I have read, I fear it may turn out slightly too static and conventional for my taste..

really could you tell me top 3 dvd productions of wagner operas that you will propose to someone who don't like wagner?

This is a terrific performance especially the villians and also Eike Wilm Schulte is a gem.