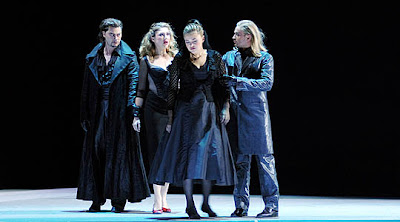 I have now attended four performances of this Peter Mussbach production of Don Giovanni at the Berlin State Opera including the first two back in December. So, until further notice, these are my final words:

While René Pape was sleepwalking his way through the performance on Friday in addition to using the first 20 minutes to warm up his voice, he was right on spot and from the beginning as well in Sunday´s performance. Otherwise, not much may be added to my previous postings on his Don Giovanni: I still find him the ideal interpreter of the Don, though clearly among the heavy interpreters, both regarding voice (he is a high bass) and presence. However, there is something strange about René Pape in this production, which he does not seem to be at ease with, a fact I strongly suspect may be attributed to Peter Mussbach´s production concept, or rather: Lack of concept, as I´ve decribed previously.

Of the remaining singers, Annette Dasch was truly grandiose. What a voice and what a dramatic presence. She seemed an entirely different singer compared to the initial performances in December, whether due to a genuine change or an initial oversight on my part is obviously not for me to say. I wouldn´t be surprised if she goes on to have a major career. She will, by the way sing Donna Anna in the new Salzburg Don Giovanni production this summer.

Jeremy Ovenden was also fine in the thankless part of Don Ottavio and the others were largely as I remembered them from December´s performances (where they varied between fine and excellent).

Obviously, many in the sold-out house, including myself, were disappointed not to have Daniel Barenboim conduct as he cancelled this run only weeks ago.
While Asher Fish, a both sympathetic and fine conductor, is no match for Barenboim in the heavy-Mozartian respect, he definitely does not serve period-style Mozart light, either.
Som may find Fish´s approach both fresh and exciting. I rather found it too fast, and furthermore Fish does tend to let the tempi carry away with him and accelerate during the fast arias and ensemble pieces, worst during the Champagne Aria - had it been much longer he would have lost René Pape (who tried not to accelerate but eventually had to) completely.

Generally most of the singers set a slower tempo than Fish, which I wish he would adjust to, but obviously that is his call. Only in Deh vieni was he forced to keep the slower tempo set by René Pape, but his eagerness to set a quicker pace was obvious.

Compared to the premiere, the April audiences were much more benign. And, one may add, probably far less critically inclined on average, since many were tourists and all around me people were deeply absorbed in the English translation of the plot summary.
My neighbour initially confused Leporello with the Don, and couldn´t understand why the Don was singing the Catalogue aria (the only piece the knew). The people sitting right behind me had trouble distinguishing Donna Anna from Donna Elvira and while admittedly not helped by the production, it doesn´t exactly reflect on an overly familiarity with the piece either.

However, for what it is worth, the atmosphere in the audience was light and for once it felt like people actually were there to be entertained.
Posted by mostly opera... at 20:30

Can you "say" a couple of words about Anna Samuil's Donna Anna? Anna Samuil was Tatiana in Eugene Onegin conducted by Daniel Barenboim in Salzburg last summer. I heard her in a radio broadcast last fall. I didn't think her voice was a "voice to remember" but I might have been wrong. Thank you.

I find that Anna Samuil had a quite beautiful and clear soprano, being on pitch (almost) all the time and effortless managing the coloratura. However, I felt she was somewhat lacking in characterization of the part - she seemed a too passive on stage in both her acting and vocal characterization. But as she is quite young, she may still have plenty of time to develop these aspects of her singing.