Don Carlos in Berlin: René Pape and then the rest.... 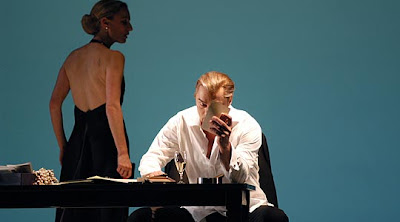 I believe I have mentioned before, that René Pape is probably the greatest exponent of King Filippo to have ever existed. Although my knowledge of historical singers is far less than complete, I simply cannot imagine anyone beating his performance in this part. And among the current interpreters of the role, I believe very few will disagree with me (one of those who does, unfortunately, is the director of the upcoming Don Carlos production at the London Royal Opera).

Just the "Ella giammai m´amo" is worth the entire evening. If I lived in Berlin, I may well have tried to turn up after the intermission for all the performances (which is just before the Ella giammai m´amo) and see if I could get in for free. I could write an entire book (well at least a short one) on the brilliance of René Pape in this part, but after giving it some thought, I guess I will save my unsuspecting (or maybe not so unsuspecting after all....) readers a lengthy ramble, trusting the point has gone through...

The problem with yesterday´s Don Carlos performance was that René Pape outclassed the other singers to an almost embarrassing degree. Only Ildikó Komlosi showed some occasional sparkle as Eboli. So it was no surprise, that the very selective Berlin audience only applauded these two singers after their solo arias. But strange to see a Don Carlos performance where neither Posa or Elisabetta were applauded after their areas. In my book, Kurt Rydl is cult. His voice may not be pleasant, but his highly individual singing style with deep inhalations of breath is unique, he is never boring, and he may well make an effective Grand Inquisitor next to anyone but René Pape. The rest, I will spare mentioning, including the conductor.

As opposed to my visit last year, no-one left their seats mid-performance and no-one protested (not loudly at least) against Himmelmann´s staging, which may be described as advanced Regie theater. Although the Spanish couple next to me did leave their seats after the intermission, which was a major relief since they were talking loudly throughout the first two acts when not chewing loudly on what seemed to be endless pieces of chewinggum. And quite a few young people were present in the audience as well and it was my impression (based on conversations in the drinks queue and the subway after the performance) that they received the staging very well.

As did I. In my opinion, it is one of the most convincing stagings of Don Carlos, I´ve seen: Based on a thorough analysis of the text, Himmelmann places Filippo in the center of the production, with focus on the contrast between his troubled family life and the public facade, he has to keep up. The question is whether this concept will work without René Pape, which will be revealed soon anyway, as Peter Rose takes over the part for the rest of the performance run.

For most people, the most shocking element were the nude bodies (pictured below) in the auto-da-fé scene. I won´t go into further detail here as I have described the production in detail in my review from last season. 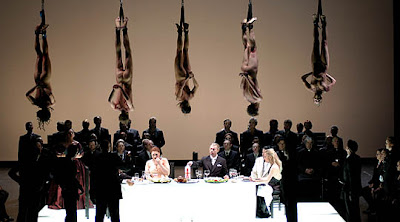 When you broke the news about ROH rejecting Rene Pape as Filippo II I must admit I was somewhat surprised - with a specific interest as we are booked for a performance at CG. There is a quaint English expression about shooting yourself in the foot!!

What is interesting is that the ROH team are staging the same production in Oslo at the new opera house in October in conjunction with ROH - and who is singing Filippo? - Rene Pape!!!! However the date I looked at in Oslo was virtually sold out.

As far as the greatest Filippo ever ... Hmmm ... I admit I have not heard him live, so the opinion is based on the Youtube clip, but Boris Christoff would sure give him a good run from the two CD/LP versions I have from the 1950's (ROH Heritage from 1957 with Giulini and the Rome Santini edition recorded by EMI in 1955).

By the way, we will correct the lack of a Rene Pape live performance in Barcelona as we have got returns for Walkure.

Coincidentally I just listened to Boris Christoff as Filip in the Covent Garden 1958 live Giulini recording. I must admit I find René Pape far superior to Christoff (and as Boris Godunov as well) - he has so much more flexibility in both voice and expression (on stage as well), in my opinion, but obviously these things are a matter of taste.

As far as I´ve heard the ROH Don Carlos production is going to the MET as well in a couple of seasons, and also there with René Pape as Filip, as the rumours go..

I will be in Barcelona for that Walküre as well, I believe since I have a work congress scheduled at that time, but I am not 100% certain (I do have a ticket though, but I don´t suppose it will be difficult to sell if I have to..)

I happen to believe that the Posa from Alfredo Daza as rather outstanding and in the Duet with Pape he stood up really at that high level of the later. Posa's aria wasnt aplauded(the death-scene cause the first one was, I WAS THERE TOO ) because even before the aria finishes there is a stage movement and the Orchestra conductor is instructed to keep on going without stop, maybe you should analize your comments before you post them.