Tcherniakov Munich Carmelites - the collective suicide of a paranoid sect 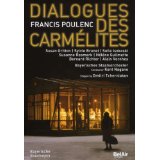 In a way, you could argue that Russian director Dmitri Tcherniako rewrites Poulenc´s opera. Because he strips it of all  religious and historical aspects, which, of course, to Poulenc were everything.

But the result is riveting ending up with one of the finest operatic DVDs availabe, a genuine contemporary thriller:

A community of paranoid women living in a glass-walled house suspended on stage away from the "outside". They are neurotic, living in yesterdays world, utterly rejecting the outside, not wanting the world of today to enter and thus chose isolation. Blanche, the innocent girl, uncertain about her role in the world, choses to join them. Did anyone say religious sect?

Finally, the women try to commit collective suicide, letting gas fill the house surrounded by police asking them to surrinder. Blanche breaks into the house and rescues the women one after one, dragging them out only to die herself when the gas inside the house explosed.

It is a claustrophobic and scary production. And within its own logic, it works. And, how Tcherniakov inspires them to moving and committed acting  is simply stunning:  Susanne Resmarks strong Mere Marie, who convinces the others to commit suicide, but escapes herself. Soile Isokoski, with the gorgeous, floating voice, chainsmoking, hardly able to hide her anxiety. Helene Guilmette´s scarily unreflective Constance, entirely wrapped up in the mass psychosis and her determination to die. Susan Gritton is constantly in doubt, oscillating between her loneliness in the real world and her wish to belong somewhere, be part of a community, at no matter the cost.
Rare, but nice to have a Madame Croissy (Sylvie Brunet) in her vocal prime, in what is often the territory of the likes of Anja Silja.

Kent Nagano shows us both the transparency and roughness of Poulenc, the sort of repertoire that suits him well.

For a scary, committed and moving performance, this is the DVD to own.

However, what Tcherniakov is exploring is not what Poulenc intended and I suspect this may weigh in for some people. In that case Robert Carsen´s rather superb La Scala production is the way to go.

I really like those productions which tell another story than the one the composer intended to tell... But it has to work. The problem with this production is that it works perfectly ( without the traditional historical and religious visual references) until the last five minutes. In fact, until this point, it is not really provocative. It is intelligent, moving, even if certain situations are overplayed, but it is coherent with the hysterical interpretation of the characters. But the end - and only the end- doesn't work. Not because it is not what Poulenc intended , but because it has nothing to do, neither with the text (sorry, but as I am french, the text is not without importance, this libretto being one of the best ever written ), nor with the context (the rest of the production is still compatible with the traditional historical interpretation, although modernized), nor with the music (maybe this is the worst,as the emotional effect is supposed to be given by the thumping sound of the guillotine), nor with Blanche's character, not only in Poulenc's intentions, but in Tcherniakov's production itself... This end has no esthetic meaning, and more than verges on the ridiculous. I was so sorry, because I took so much pleasure and emotion from the rest of the production. Nagano maybe is not really idiomatic as a conductor of french operas, but I did'nt know it was possible to get such a gorgeous sound with this music...

I just wish it were still possible to get hold of a copy, used, new, whatever. From the snippets I have seen and this description, I can see why the Poulenc estate had it withdrawn, but as an opera director myself, I am fascinated by such radical rethinkings whether they entirely work or not.