Paris: Tcherniakov with Macbeth on DVD 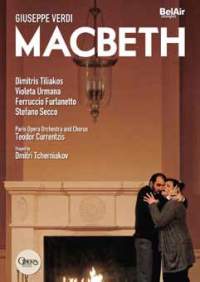 Beginning each scene with areal photoshots from google-earth, slowly zooming in on a village, to end by showing us the individual house where the following scene will take place, Dmitri Tcherniakov effectively sets the scene for this Macbeth, shown at the Paris Bastille Opera in 2009.

We see a small town run by gang of mobsters. We have the upper class, the mob, the middle class and then the people. Macbeth and Lady Macbeth belong to the middle-class, but no-one is clear cut.

The central element to Dmitri Tcherniakov Who are the witches? He answered with a: They are everyone. They are, The people, one of Tcherniakov´s main interests as a director. The people becomes a growing influence in the opera, from the initial killing of the mobster Banquo, to the smashing of Macbeth´s house and the burning of the city. The people have come to power.

It is both intelligent and very innovative.

There is one draw-back however: The singers. Mainly Dmitri Tiliakos, who starts out disastrously wobbly, however improves eventually, though without completely loosing the wobble.
Violeta Urmana, not known for her acting skills, here shows that with a good director, she can act like a movie star. Her portrayal of the insecure, desperate Lady is very touching. However, vocally she is too heavy, and has too much trouble in the high register. She may call herself a soprano now, and she may take on soprano roles, but essentially her voice-type is still a mezzo-soprano.

Ferruccio Furlanetto in leather jacket convinces as mobster, as does Stefano Secco as an ordinary man of the people.

This was a co-production with Novosibirsk Opera, where Currentzis is musical director, which probably explains his presence in the pit, but he nevertheless does well.

It seems that Mortier is now taking this production to Madrid