DVD Walküre from The Thielemann Ring 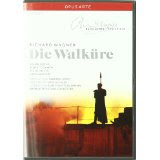 I have no doubt that this Bayreuth-Ring 2006-11, directed by Tankred Dorst will be known as The Thielemann Ring.

From the beginning, this Ring was planned for CD release only and released as a 14-CD boxset in 2009 with the doubful honour of being one of the strongest in terms of the conductor, as well as probably the weakest in terms of singers.
However, with the recent explosion of the DVD-operatic market it probably makes sense for the Bayreuth Festival to try and distribute it.

Tankred Dorst was universically criticized for lack of ideas and static concept upon the premiere in 2006.  However, I saw the Ring in Bayreuth in 2007 and have to agree: The only highligt was Christian Thielemann. Who, on the other hand was stunning.

Dorst´s main idea that The Gods live amongst us,but we cannot see them and that man destroy nature are neither novel nor exciting. Admittedly, his preparations were not optimal, having had to take over after the cancellation from Lars von Trier. But nevertheless, a Bayreuth Ring is a Bayreuth Ring and this Ring was disappointing. I have previously written a comprehensive review of the entire Dorst-Thielemann Ring including a detailed description of the staging.

Edith Haller took over Sieglinde´s part from the previous years Eva-Maria Westbroek and Adrianne Pieczonka, and though somewhat weak in expression she has a truly beautiful voice with a wonderful bloom and seems to raise easily over the orchestra.
Johan Botha has a large, effortless voice, but for the rest I completely agree with the message he got from  the Intendant of the Vienna State Opera. Both Albert Döhmen and Linda Watson performs in accordance with Tankred Dorst´s staging: Neither spectacular nor disastrous. While Mihoko Fujimura does not have a large, dramatic voice, it is very beautiful.

Christian Thielemann is the true revelation of this DVD and, indeed, hearing him conduct this Ring in Bayreuth was one of the major operatic experiences I have had. The glittering beauty, the broad tempi, the subtle changes in tempi. It becomes quite clear, however, how the acoustics of the Bayreuth Festival House with the covered pit actually works against the explosive and contrapunctual nature of the Ring and if you a a conductor don´t work against it, you risk to lose the momentum and make it sound like Parsifal. This, however, does not seem to bother Thielemann, who in fact conducts this Walküre much as he does Parsifal.
Nevertheless, together with Daniel Barenboim, no conductor today has a better understanding of Richard Wagner.

(Characteristically) good review, although having had the good fortune to have attended this exact same performance in the Festspielhaus, perhaps I might be inclined to bump Johan Botha's rating up just a wee bit, even though I do understand why you only gave him a "2"... he and Edith Haller (along with Christian Thielemann, of course) were responsible for a particularly enjoyable Act 1, which the audience loved, as you can tell on the DVD, by the very enthusiastic reception. For the most part, I think your comments are spot on, and the DVD is in any case a very nice memento of the performance, to be sure, and it captures the overall atmosphere (as well as a certain warmth, from it having been a truly live performance) very well indeed, as does the little "making-of" bonus feature - so actually very enjoyable. Admittedly, though, it also has to be said that viewing the 1991/92 Barenboim/Kupfer "Ring" on DVD makes it quite clear (to put it mildly) just how much had been missing from Dorst's "Ring" in terms of really detailed direction of the singers in particular.

... While on the subject, I would otherwise like to add that I also studied in considerable detail your copious notes and photographs from your own Bayreuth visit in 2007, concerning both the Festival in general and the Dorst "Ring" specifically. They were a terrific orientation aid for my own visit to Bayreuth two years ago - so much so that when I finally arrived on the "Green Hill" I almost felt like I had already been there before! And they also helped convince me that the Dorst "Ring" would be worth experiencing for Thielemann's conducting in particular, and in that regard it completely met all my expectations, so... thank you. Glad to see you are keeping the site going strong, I enjoy reading it on a regular basis - very best wishes for the future. :-)