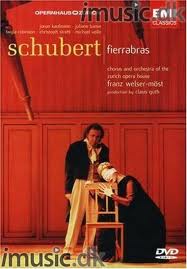 The action involves: A Frankish king, a Moorish prince, two princesses, a total of 4-(5) potential lovers from both camps and provides a happy end after a combination of love, hate, revenge, trials and (self)-sacrifices.

For those new to opera: No, this is not a standard repertoire work, which may be explained not only by the complicated story (which is nevertheless not more complicated than may be seen elsewhere) but also by the music. Though beautiful, essentially Fierrabras consist of interrupted, orchestrated lieder, though not lieder entirely en par with Schuberts best.

Wisely, and entirely according to his usual stage practise, director Claus Guth has chosen not to stage Fierrabras as a naturalistic Moorish drama. However, despite the good intentions, eventually he does, for once, somewhat miss the mark here.

The entire opera takes place in Schuberts studio. Or perhaps even in Schuberts brain. An actor plays Schubert, who also occasionally speaks, conducts, escorts the singers on and off stage etc..All in a miniature world, with oversized furniture and singers presenting small symbols (a crown, a wooden  bird etc) to clarify their position in the play. Clearly, Claus Guth thus wants us to be part of the creative process, but for more than two hours it becomes more than tedious.
Despite the opera being called Fierrabras, Jonas Kaufmann´s role is rather smallish, and like the other singers, he performs well.