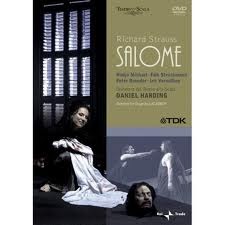 For unexplicable reasons (actually, not really, her looks explain it) Nadja Michael now appears on two Salome DVDs, the other being the 2008 McVicar production at the London Royal Opera.

Nadja Michael is the exact type of opera singer, I´d love to give a raving review and in theory see in everything: She looks more than great, she has a body to die for (a former competitive swimmer in the former East Germany), she is agile on stage, she is a great actress. And before she switched fach from mezzo to soprano, she was in fact also a good singer. I still remember her Brangäne in Carnegie Hall around 2000.
However, these days are long gone indeed. Looks apart, Nadja Michael simply cannot sing anymore, not to speak of the part of Salome, with the fiendishly high tessitura way way above her comfort zone. Furthermore, her vibrato has become excessive, the sum being a distinctly ugly sound.
Apparently many disagree, since she has made something of a career with the part, singing it both at the London Royal Opera, San Francisco and on this current La Scala production.

The rest of the cast is relatively good, Falk Struckmann effective as Jochanaan, though also he past his prime and Iris Vermillion an attractive Herodias.

It is also the second time we see this Luc Bondy production on DVD, the first time with Catherine Malfitano and Bryn Terfel from London, as usual, plays with shades of light in an otherwise eventless slash Victorian style thriller staging.

However, a Salome without a Salome, no matter the qualities of the other production elements, simply does not work.