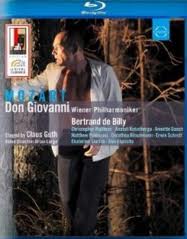 When I saw this production in Salzburg in 2008, I found it to be a masterpiece only marred by non-inventive playing from the Vienna Philharmonics under Bertrand De Billy. Though the DVD was recorded within 2 weeks of my visit, I find the playing on the DVD considerably more interesting, though De Billy is certainly no Barenboim in this repertoire.

The concept still holds to an extent that I without doubt find this the most interesting Don Giovanni DVD on the market: Described in detail in my 2008 report, Don Giovanni is a man fighting his own demons, a somewhat rootless character on his way to destruction. Here, the women are the strong ones.

On top, the circular set used throughout the opera is wonderfully surreal and uneasy: A dark, hilly pine wood + a bus stop. Clearly among the best stagings I have seen from Claus Guth.
Based on her recent performances as Elsa (Lohengrin) in Bayreuth, I wonder if Annette Dasch´s  voice is already beginning to decline (she is in her early thirties), but this Donna Anna she delivers. Dorothea Röschmann´s classically sung Donna Elvira leaves almost nothing to be desired, except perhaps a bit more radiance. Christopher Maltman convinces as the desperate Don alongside Erwin Schrott, a superbly acted, and slightly less superbly sung Leporello as he is sometimes criticised for not actually singing the notes, which he doesnt. Matthew Polenzani makes the best of the rather boring part as Don Ottavio, while Ekaterina Siurina and Alex Esposito are charming as Zerlina/Massetto.

In the pine wood:

Amazing production.....Claus Guth is a genius!