Florez and Damrau in Rigoletto DVD 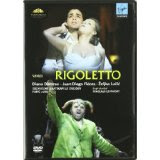 I remember well the sold-out performances in at the Dresden Semperoper in 2008 marking Juan Diego Florez´ debut as the Duke and possibly open a whole new repertoire for him. That didn´t happen as he apparently has decided to retire the role for vocal reasons (apparently he feels it does not suit his voice) and return to his original Rossini-Donizetti fach.
And after listening to his performance here that seems a reasonable decision: Not that he is not excellent. For he clearly hits the notes and sings with enthusiasm. But somehow he seems to lack the vocal heft necessary for him to continue in this repertoire without damaging his voice.
Next to him Diana Damrau shines as Gilda. Despite slight overacting, few can sing a Gilda like her today. Zeljko Lucic is quite appropriate as the somewhat nasty Rigoletto and generally the Dresden Semperoper has assembled a cast without weak links.
The production is one of Nikolaus Lehnhoff´s best. It is stylish and elegant, emphasizing the Pagliacci elements in the score, with Rigoletto climbing out of a hole during the ouverture. Masks, colours and disguises are key elements exaggerated almost to the grotesque in Rigolettos neon-green costume and Gildas symbolic blood on her white dress.

Though perhaps lacking in interpretative depth, this is nevertheless not a bad suggestion for a colourful and entertaining Rigoletto,