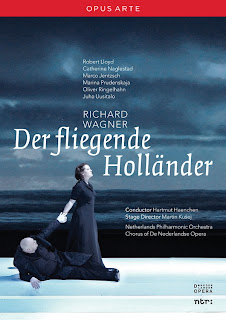 A group of tourists are stranded. Behind them , and set of double glass doors, the swimming pool of the hotel is visible. The sleek tour guide (Daland) muses around, trying to find a solution, which arrives with the Dutchman´s bag of Euros. Who are the black-hooded people behind the glass doors? Criminals? Escaped members from the Dutchman´s crew, we later find out. At that point, an unusually resourceful Erik has already killed some of them. What are they really? An allegory of illegal immigrants in Europe as alluded by some? Or just a gang of criminals?

Senta is completely detached from reality, sitting alone by an old spinning-wheel as the only one amidst modern women hanging a swimming pool including a posh Mary in silver cocktail dress. That Catherine Naglestad´s Senta is rather mature seem fittingly here - she has been living outside reality for a long time.

Late, in Act 3, the stage is switched around, now we are among the black-clad, looking at the swimming-pool party.

Hitting more often than missing, this is nevertheless not one of Martin Kusej´s best stagings (on DVD, look for Lady Macbeth from Mtsensk or Rusalka) as he lacks a certain clarity of conception.

Catherine Naglestad has both charisma, and heft, and gets better and better. Her vocal strong point is her high register, though if your reference is Leonie Rysanek, she will eventually fall short. Without being exceptional, slightly too wobbly and not too high on the charisma scale, Juha Uusitalo is nevertheless a better Dutchman than Wotan,.

Robert Lloyd (born 1940), thus 70 years at the time of the performance, was more than adequately challenged as Daland, while Marco Jentzch convinced as Erik.

Unfortunately, important recent productions such as Peter Konwitschny´s in Munich are not (yet?) available on DVD. and generally, the Dutchman competition on DVD is not overwhelming. Though old-fashioned by todays standards, Harry Kupfer´s 1978 Bayreuth production may still be the choice for many.

Yes, having seen Konwitschny's staging in Munich last month with great cast - I will never hear a better Erik than Klaus Florian Vogt - I must beg for a DVD release!

will that dvd with Vogt be released??? i wish it too